Yesterday was my boyfriend's birthday.  I LOVE birthdays; he does not.  Every year I try to throw some big, surprise celebration, and every year it's always fun, but not exactly right.  So, this year I decided to admit that it's his birthday, not mine, and we should do (or not do, as the case may be) whatever he wants.  So that's what we did.  We had a quiet night in with some delicious Eritrean food from our favorite place and watched the West Wing.

My original plan for Mr. T's birthday present was an iPad mini.  I don't necessarily understand the point of iPads except as a fun toy (I'm sure in some realms they're quite useful, just not in mine), but despite that we'd both secretly been wanting one.  We actually almost got one the other week, but they were sold out. Naturally, since I was super excited about this idea, Mr. T ruined it by coming home a week before his birthday with an iPad mini that he had just bought as his own gift.  Turning lemons into lemonade, I immediately started thinking up ideas for a case (in addition to a few other iPad and none-iPad related gifts, including cookies made by one of his coworkers.  Seriously, these are the best cookies in the world.  And Mom is a pastry chef, so I've grown up around good cookies. [Sorry Mom, I already told you this on the phone, so no surprises].  If you live in the DC area and are in need of some amazing cookies, let me know.  She sells them (for reasonable prices, too)!  Unfortunately, she doesn't have a website so I can't give you a link, but I can personally vouch for them and give you her contact info). 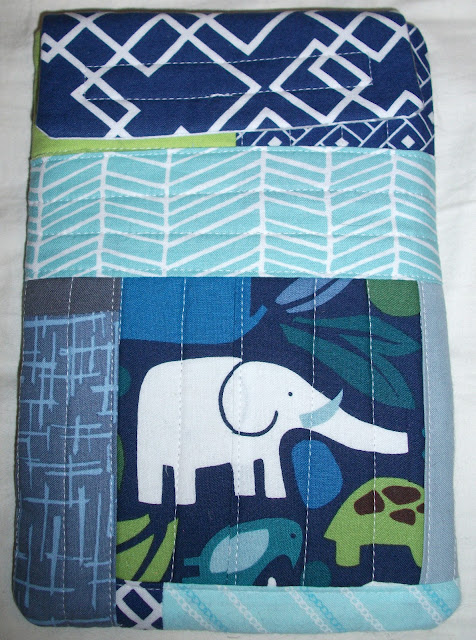 As I mentioned last week, I used the quilt as you go (QAYG) technique for this case, following the tutorial posted by Elizabeth of Oh, Fransson!  Mr. T wanted a blue case, so I pulled an assortment of fabrics from my scrap bin and stash. I also had some canvas left over from a bag I made last year. I'm not sure if I'm a fan of QAYG, at least for this project.  I'm sure part of the problem is that I need practice, but I found it very limiting as to where I could place the next piece.  The small scale of the project compared to the relatively large fabric pieces I was using may also have contributed to my frustration. I do like the overall effect at the end, but I think I would have found it more enjoyable if I simply pieced the front and back, and then quilted them with the canvas backing. 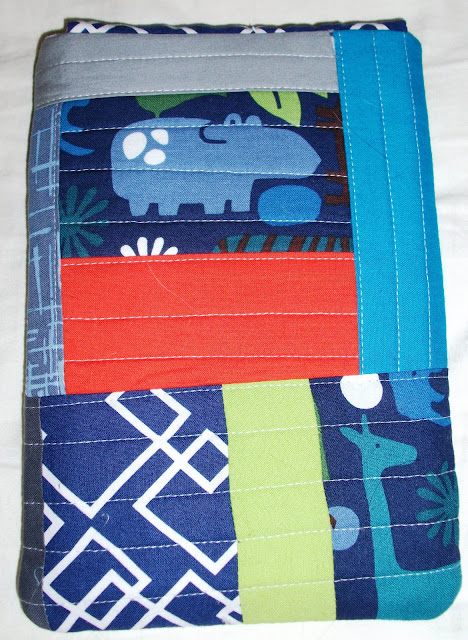 Mr. T loves elephants, and I've been collecting elephant fabric to make a quilt for him, so I broke some of it out here.  All the animals are fussy cut from Alexander Henry's 2D Zoo.  I'm using this fabric for a different project and I absolutely love it. It's so cute and I think works well for men and boys of all ages. 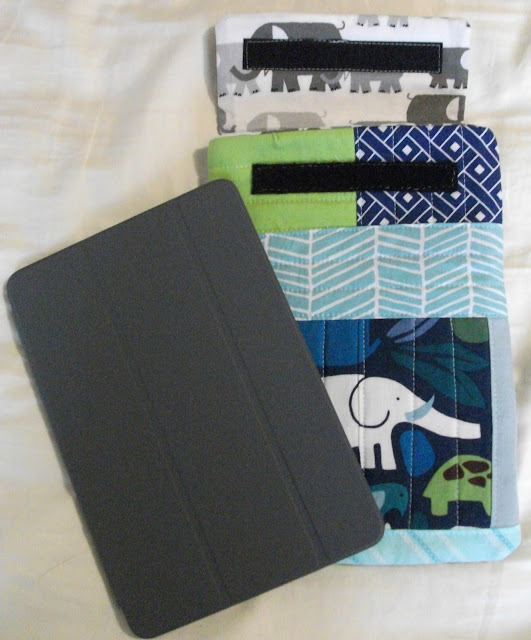 For the lining, I used Ed Emberley's Happy Drawing Elephants, which I purchased months ago from Britex Fabrics in San Francisco in part from nostalgia (I used to love drawing from these books when I was younger) and in part because I knew Mr. T would love it even though he'd never heard of Ed Emberley.

I did have a bit of a struggle with this case.  In my previous versions (here and here), the lining has been a bit too large, so there was a persistent wrinkle because it didn't fit perfectly inside the outer casing.  This time, I tried to make it just a hint smaller so it would fit better.  That part worked out nicely, but I actually had to make the lining twice because the first time I cut it a bit too small.  It's still snug, but the iPad goes in without too much effort and I'm sure it will stretch and loosen up.  I also made the mistake of waiting until it was complete to sew on the velcro.  This has been fine with the others I've made, but since this was a mini and because I was doing a full-length piece of velcro, I couldn't finagle it through my machine, so I had to hand sew the piece that's on the body of the case.

Mr. T didn't want the case to be too bulky, but I did add an additionally piece of batting to the back.  The outside QAYG pieces were not as thick as I thought they would be and I just didn't feel like that one piece of batting quilted in there would offer enough protection.  I did not double layer the front because I knew he would be using the screen cover (pictured above), which was another of my gifts to him.

He saw me start the case, but he was surprised when I pulled it out last night to give it to him because he hadn't seen me finish it.  I love being sneaky!