A lot of my crafting these days is centered around surprise gifts for my brother and sister-in-law (really for my niece), so I can't share any of it just yet. Instead, I'm finally posting some photos from the trip Mr. T and I took to Colombia in March. 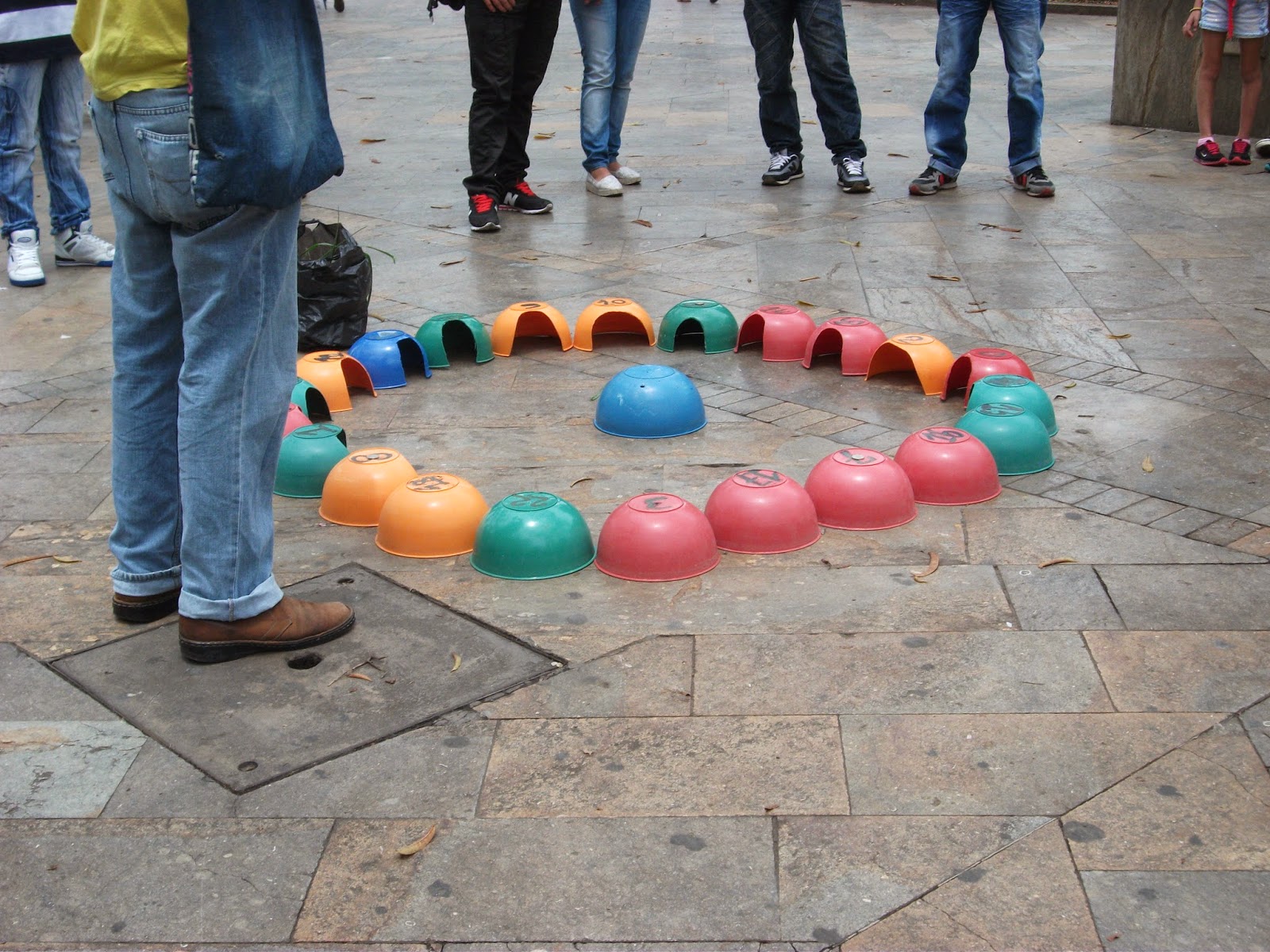 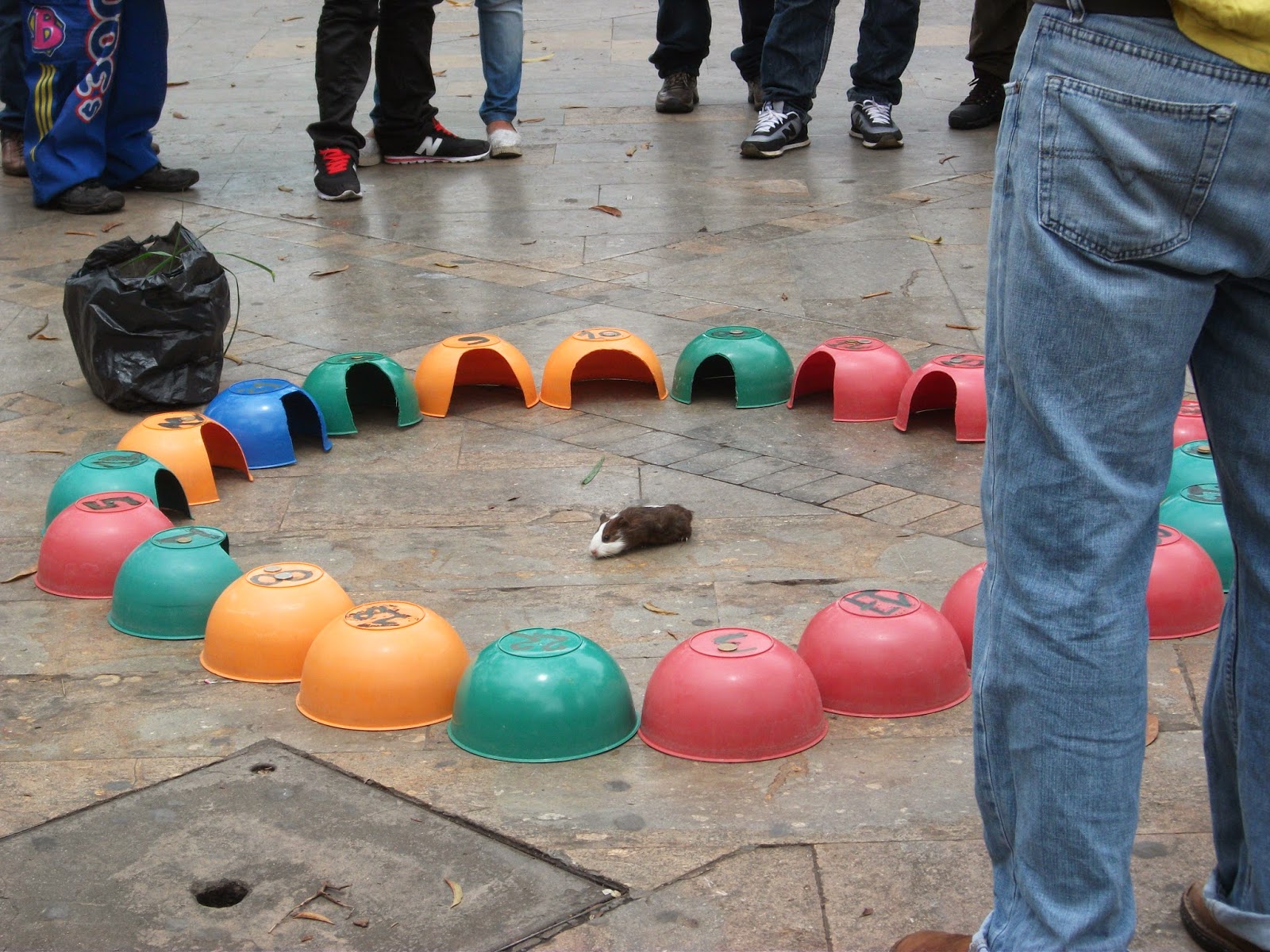 Guinea pig betting in Plaza Botero. Spectators put coins on top of the bowls to guess which one the guinea pig will enter. If he enters your bowl, you win! I think. It was unclear whether the organizer actually gave money to any of the winners, or if you were just forfeiting your coins to watch a guinea pig scurry around. 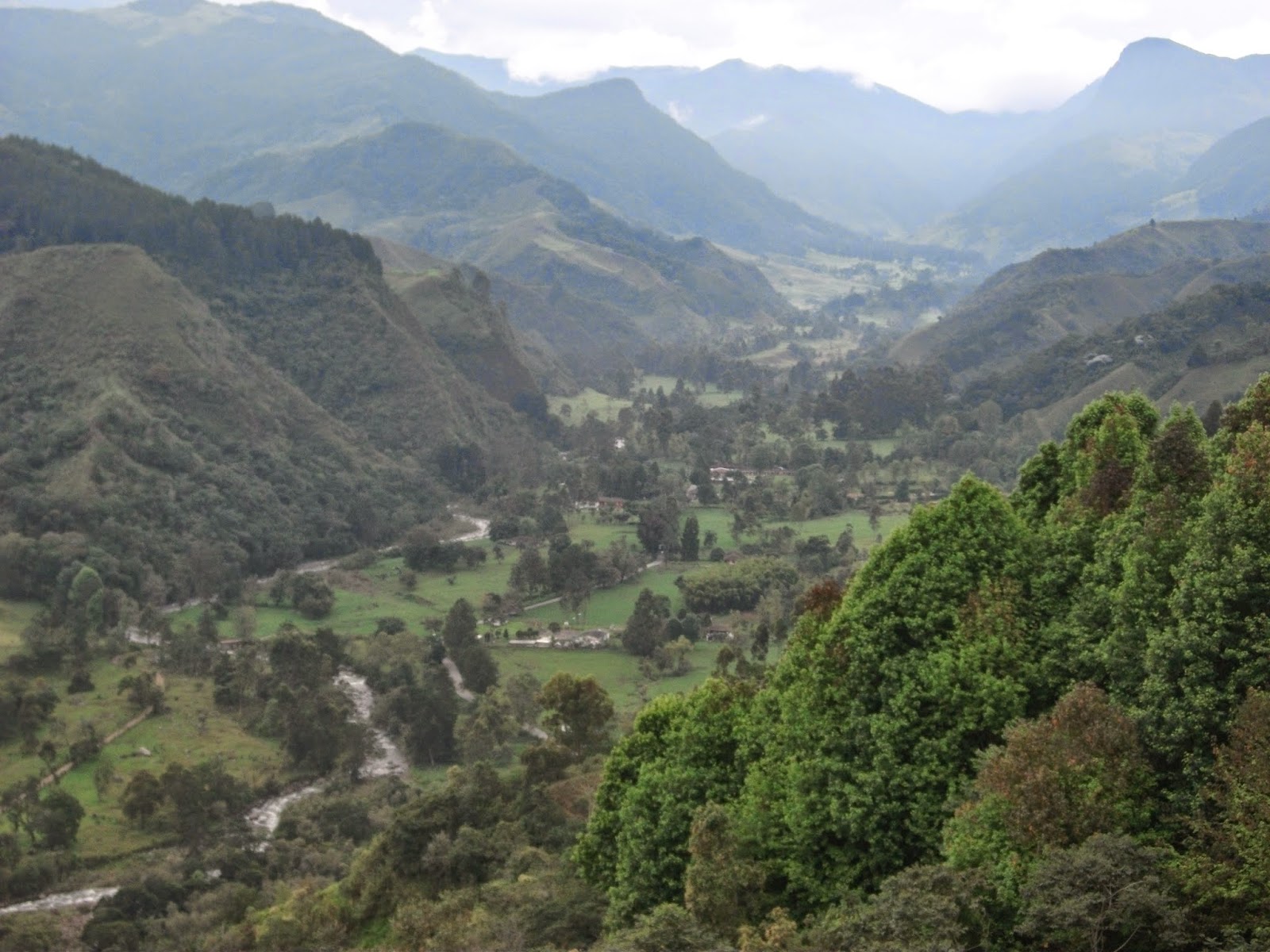 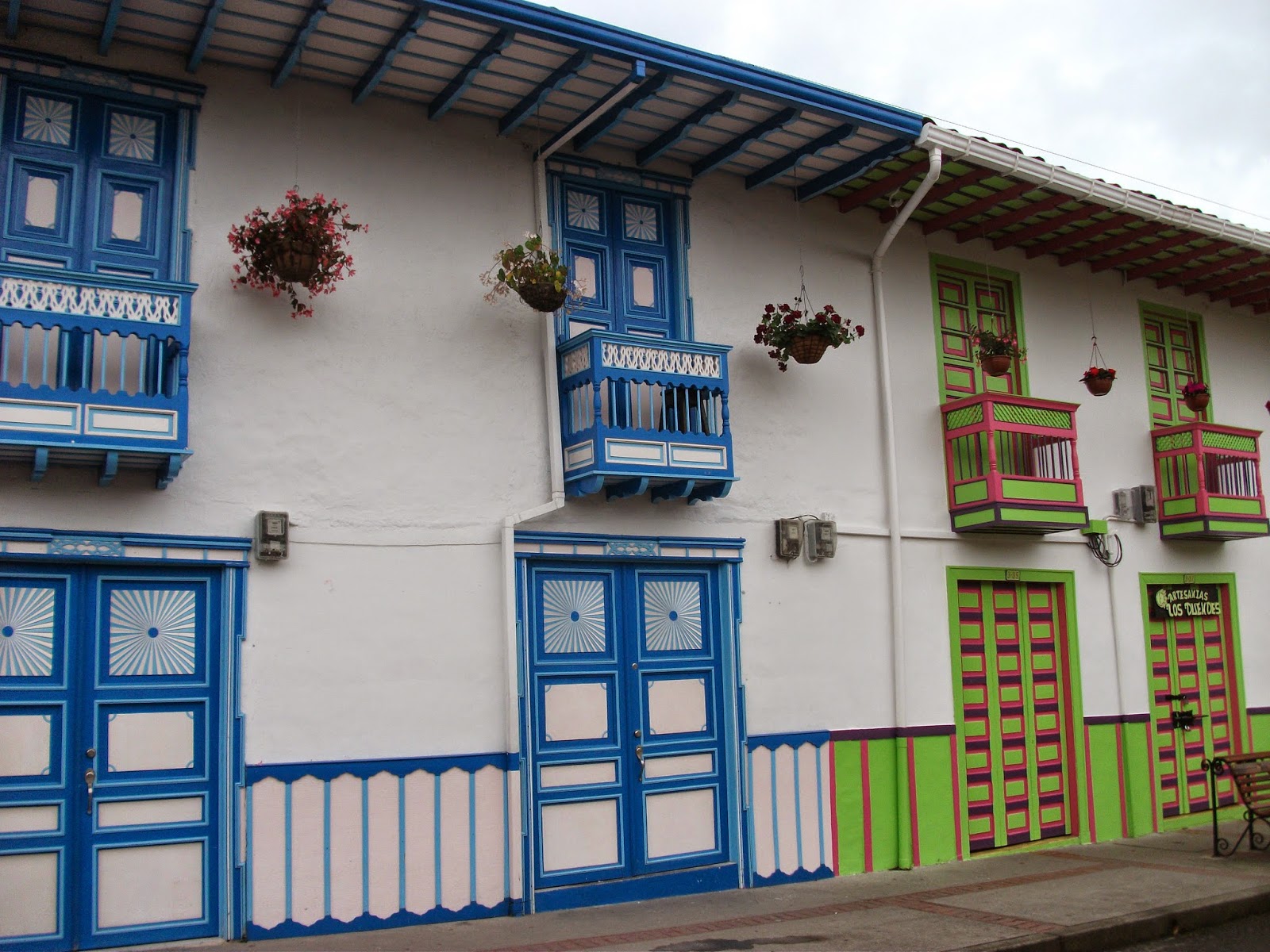 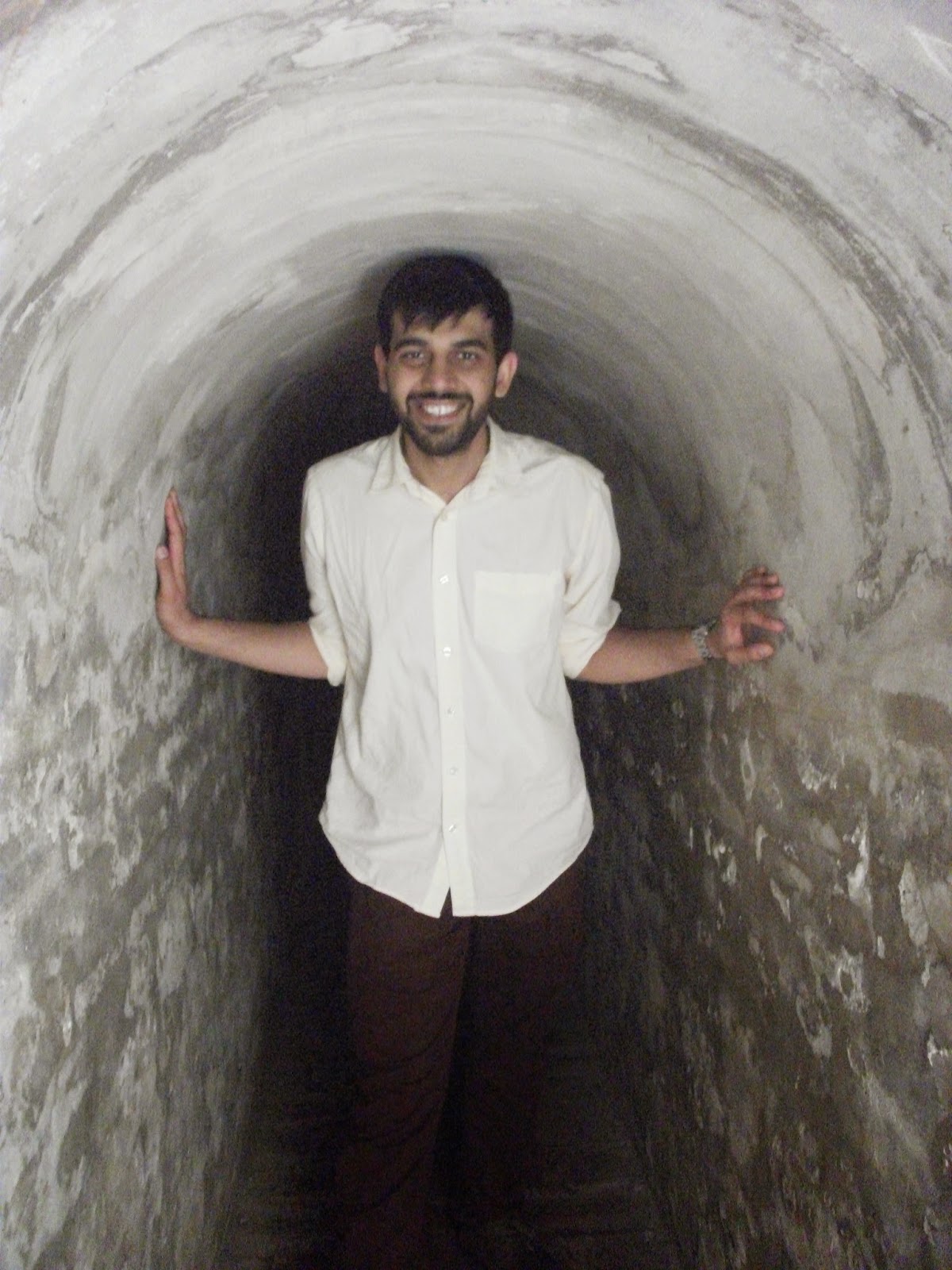 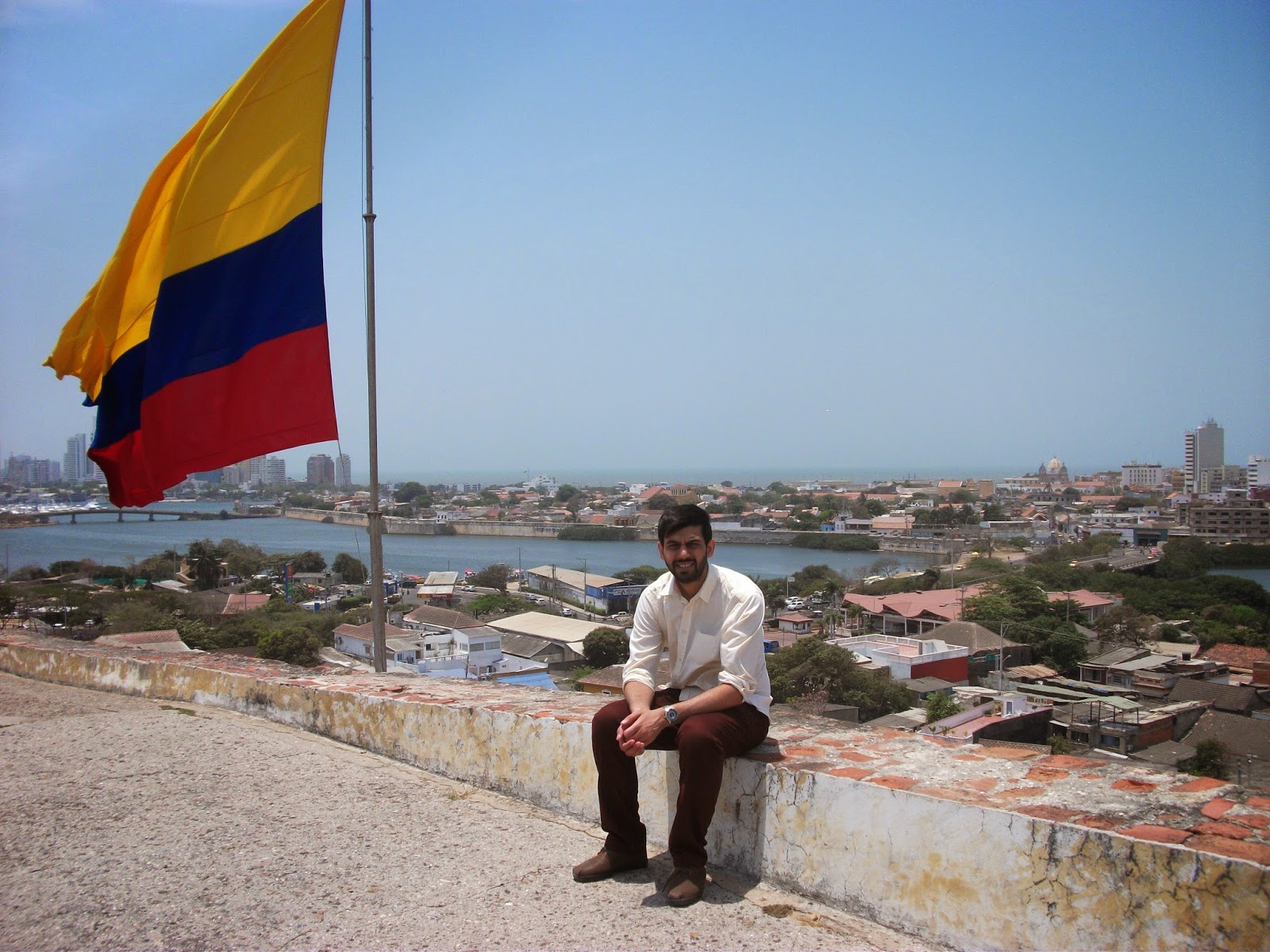 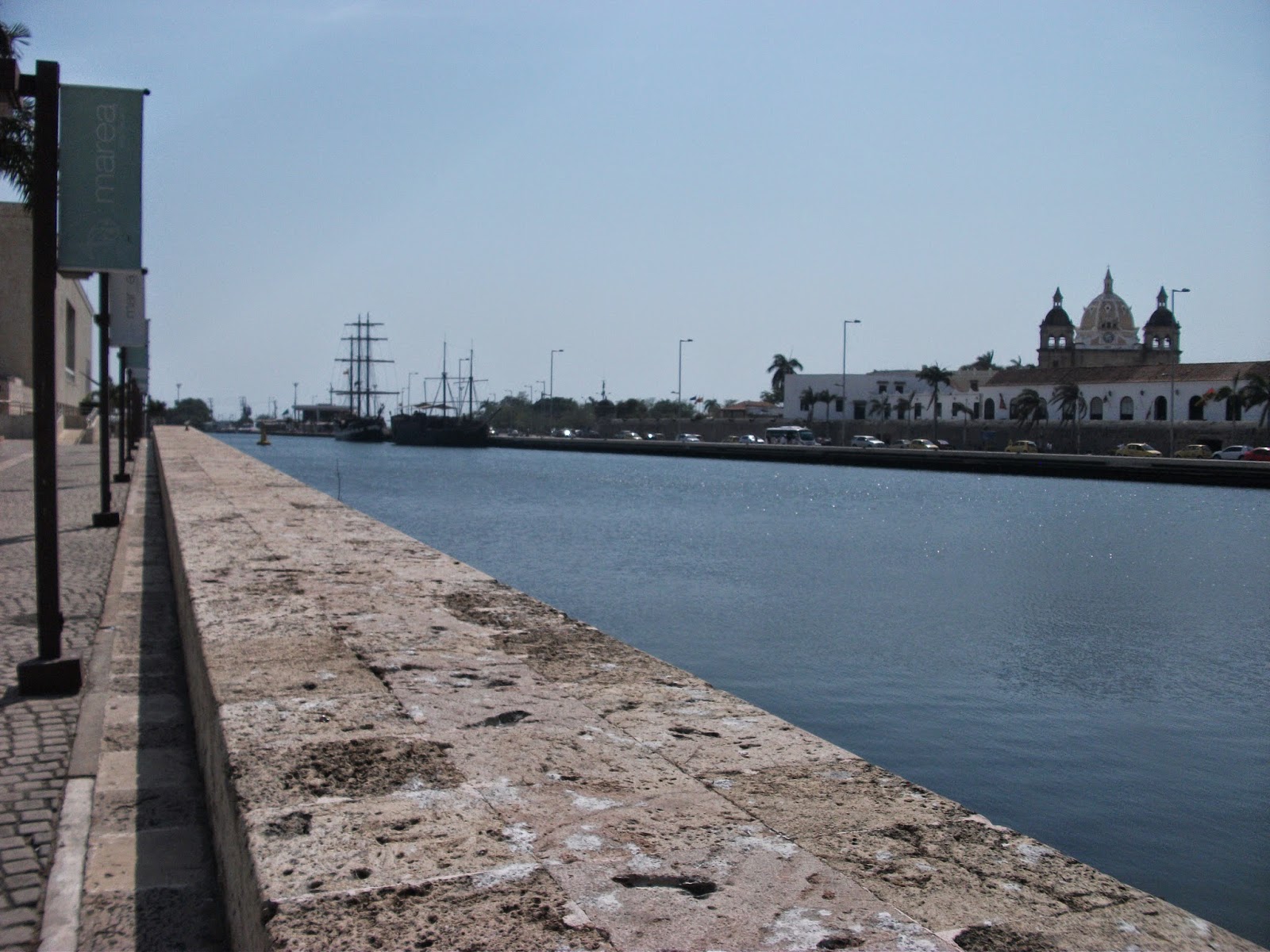 And after that, my camera died.... Our second day in Cartagena we went on a boat trip to scuba dive and visit Playa Blanca, and we dropped it in the sand/a hint of water, and now it is no more. After Cartagena we went back to Bogota for two more days. Naturally, I dragged Mr. T to a craft fair/flea market. We also ate lots of Crepes and Waffles - 3 times in 10 days; I wouldn't put it past us to go Colombia for a weekend just to eat there again if we could find cheap enough flights.

Overall, we had a really good time. Finding food was difficult at first - we're both vegetarian - but got easier as the trip went along. Surprisingly, I think some of the best food we had was in Salento, a town of roughly 4,000 people.

- Metrocable
- Coffee tour
- Montserrate at night. We ate chocolate completo (hot chocolate, cheese, and bread) in a small cafe at the top. Muy romantique! (We tried going during the day, but the queue was at least 3 hours long. So glad we ended up going at night. The views over the city were beautiful, and we didn't have to wait at all!)

- Playa Blanca - mostly because we're not really beach people and you have to pay to sit anywhere; also, we don't eat seafood, so the lunch options were quite limited
- Zipacura - probably would have been better if we knew what the guide was saying; also, we went with some strange people who kind of soured the experience for us
- La Puerta Falsa - this place got great reviews on TripAdvisor and our guidebook, so we stopped in our first day in Colombia. Maybe it's because we're veg, but it was super disappointing. The people working there were all very nice, but the food wasn't as good as we were expecting based on the reviews. The chocolate completo we had on top of Montserrate was much better.


Lastly, I mentioned earlier that I learned a bit of Spanish using these podcasts (just the free level, not the subscription options) and they worked great for giving me a base. Unfortunately, I fell off the Spanish-learning bandwagon a week or so after we returned, but I'm determined to become proficient in another language within the next year or so, so I've jumped back on! I'm using Duolingo for now. I just started so I can't provide a review, but I've heard good things. It's a similar platform to Rosetta Stone, but it's free.  The concept is really cool - check it out.

A few weeks ago Lindsay Connor (of Lindsay Sews and Craftbuds) put out a call for pattern testers on Instagram (I'm @thecraftyroach, by the way!). I haven't done much testing, but this pattern was too cute and I thought it would be something fun to make for my first niece, who's due in a few short months!  Lindsay released the pattern last week so I can finally share my completed Hugh Manatee here!

As his name suggests, Hugh is an adorable manatee plush that any child - or adult - will find cute and cuddly. The pattern calls for fleece, but I didn't have any on hand so I decided to use some quilting cotton from my stash. This Kaffe Fasset parasol print was the first quality, non-JoAnn fabric purchase I made when I started quilting - nearly two years ago now. It's so bright and cheery, so I figured it would make a great manatee. However, since his back is so busy, I gave Hugh a neutral belly to balance him out. It's definitely Kona, I think pomegranate, but I can't be sure.

Hugh came together really easily and quickly. I did have a few issues with matching the top and bottom. The top is purposefully larger than the bottom in order to make the back fuller and more prominent than the belly, but because I used quilting cotton rather than the suggested fleece, which has a bit of stretch to it, he got a few more wrinkles and I had to cut 1/2 inch or sew off the top at the tail in order to neatly whipstitch him closed. Definitely still doable and totally cute, though. Also, I used the full bag of stuffing the pattern calls for and he's quite firm, so keep that in mind if you, too, like a firm softee. 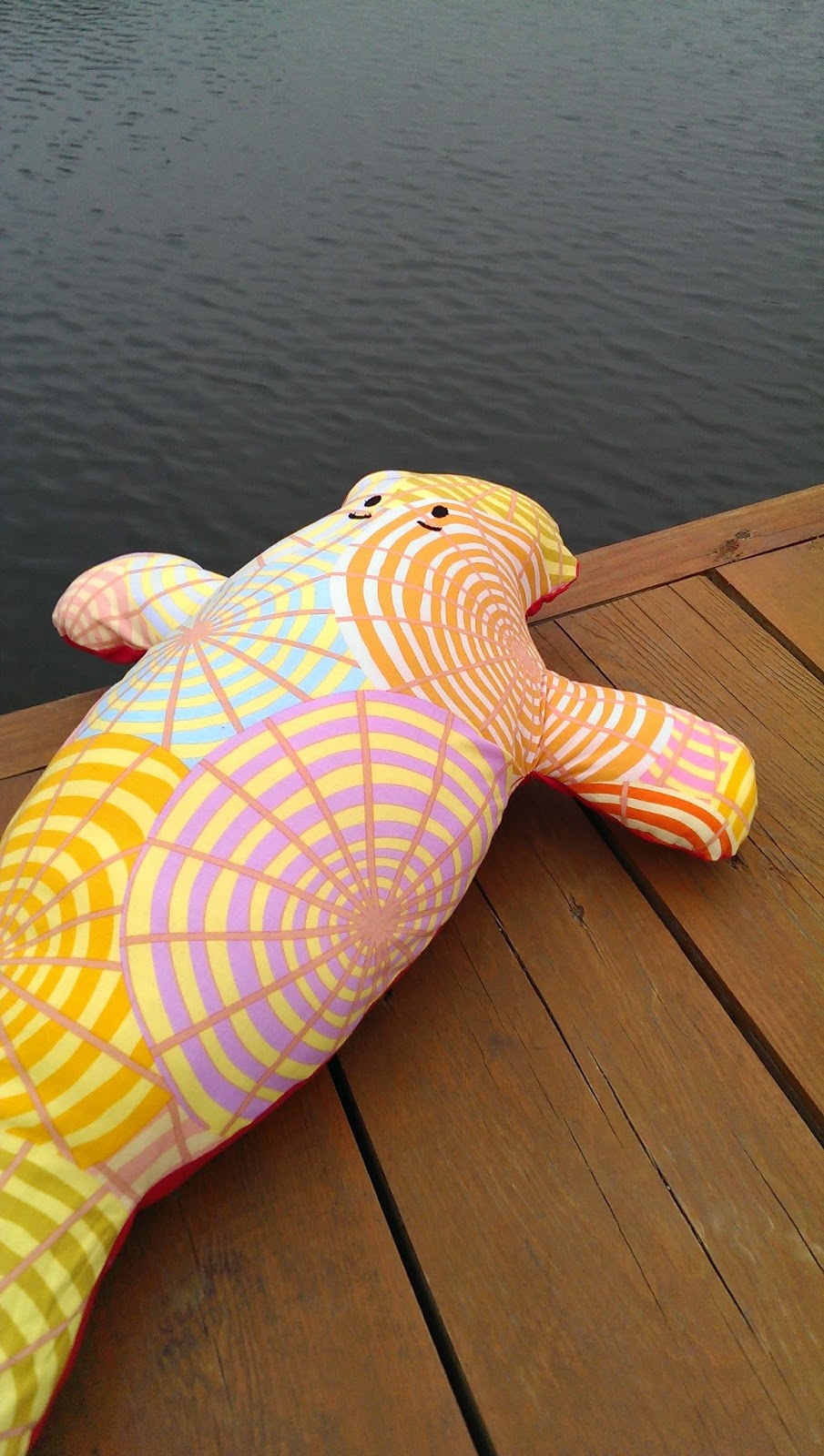 So, now that you are in love with Hugh, why don't you go pick up a copy of the pattern! It's 50% off through Father's Day, but after that it goes up to the normal price of $8.  And also be sure to check out the other testers.

In May, Amy asked us to make any two star blocks of our choosing in a red wine color palette.  Since I'm trying to make better use of the crafting books and magazines I own, I chose two patterns from Vintage Quilt Revival.

First up is Dove at the Window, from page 126 in the book.  Amy specifically requested non-wonky stars, so I followed the directions for the tradition block, rather than the wonky update. 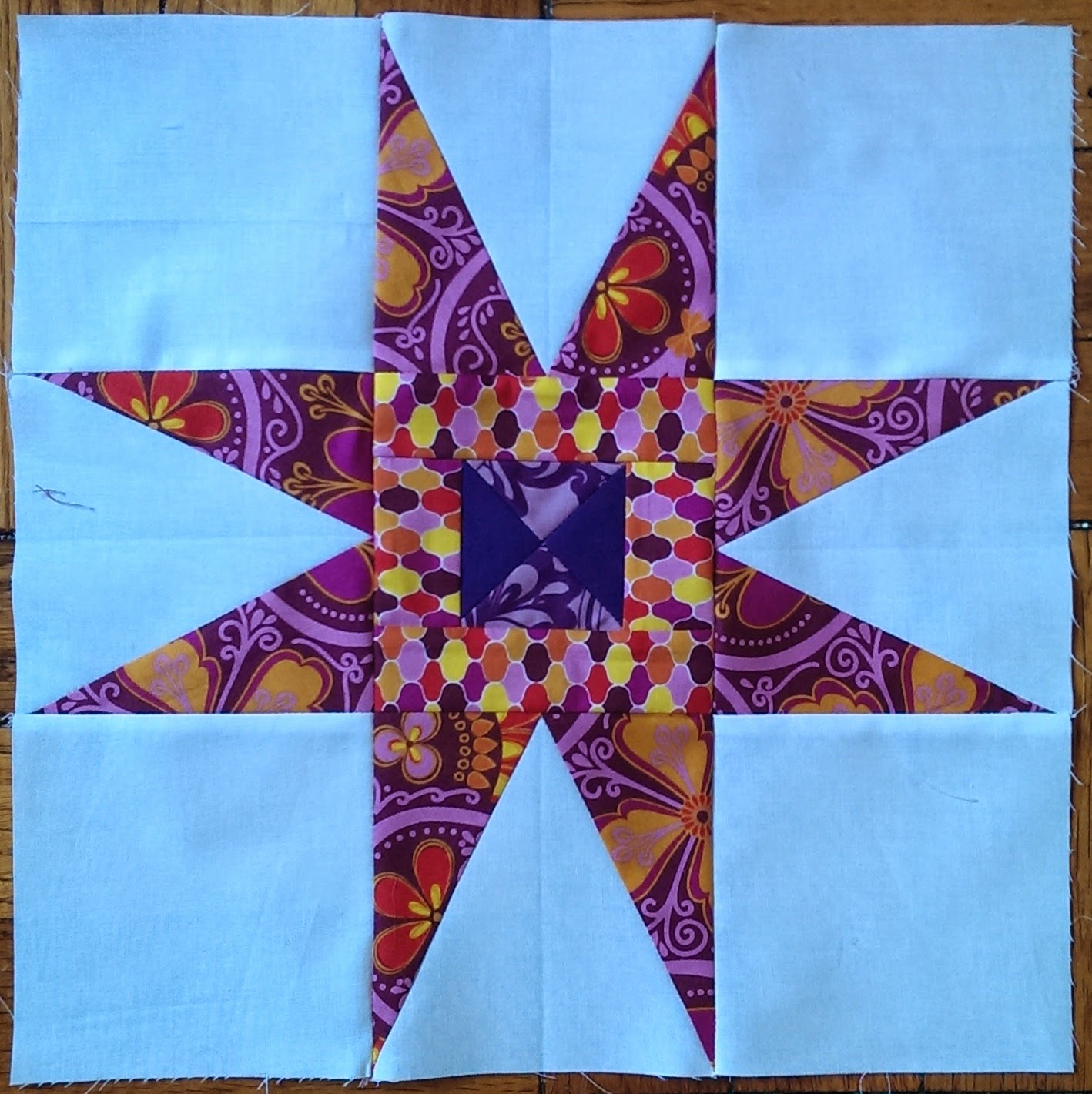 The fabrics are definitely a bit busy, but after staring at it for 3 days it's grown on me, so I decided not to redo it. Plus I think it will be a bit less harsh once it's put in the quilt will all the other stars.

Next up is the Star and Pinwheel block from page 62.  I was a little wary of all the bias edges when making this one, but it worked out alright. 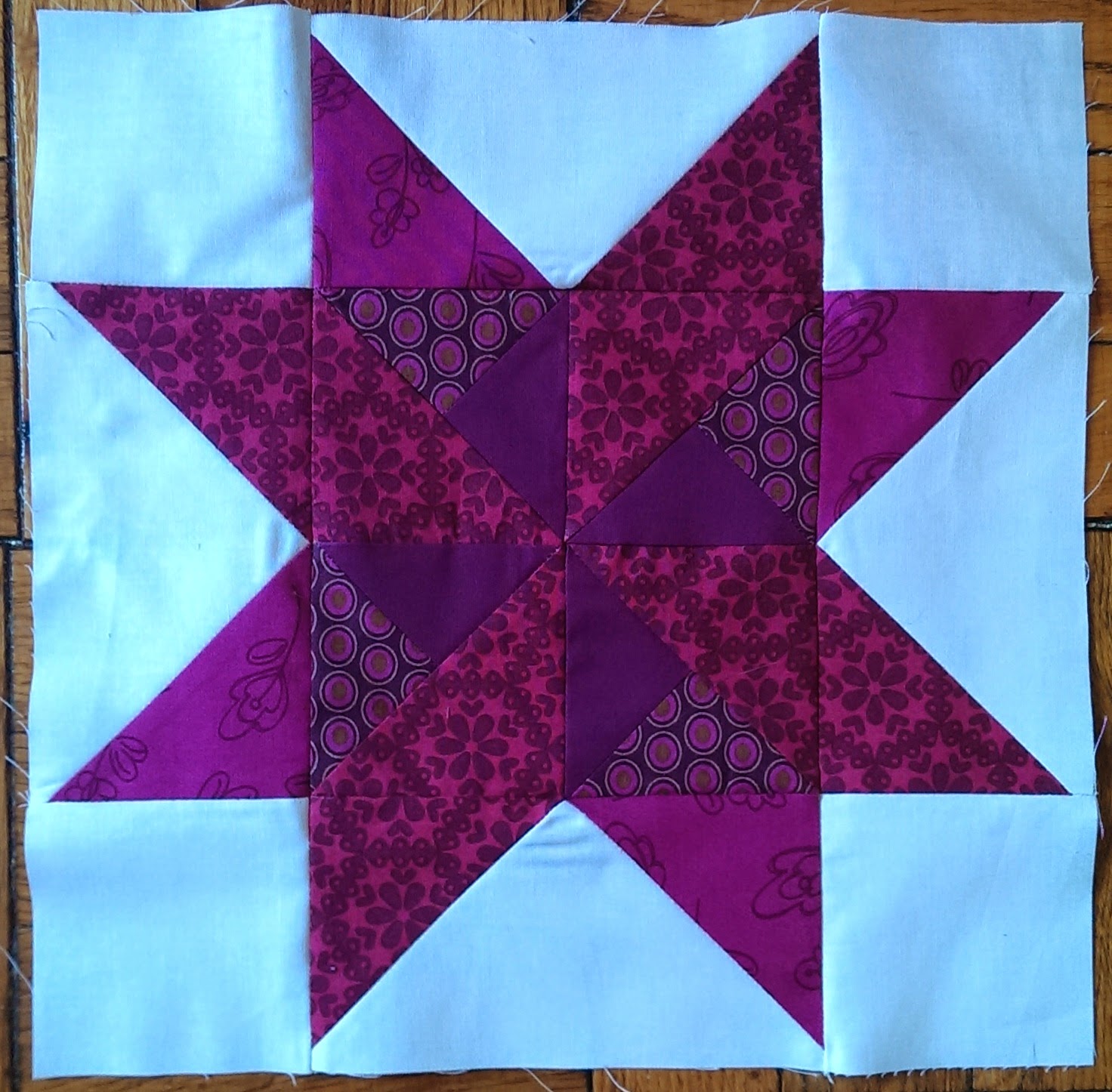