do. Good Stitches catch up


I just realized I have THREE months worth of do. Good Stitches blocks to share. I thought I had already shared September since I finished it several weeks ago, but apparently not. So here we go. 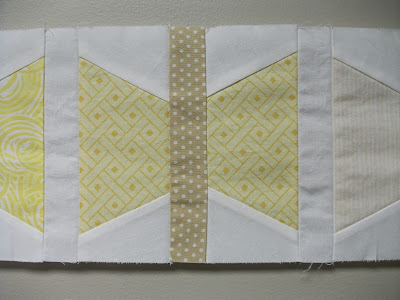 Amanda mixed it up for us this month. She wanted to make a rainbow stripe quilt, so each member chose a color and made a strip using any block/design of her choice. I had been wanting to make butterfly blocks for awhile and I thought it added a fun level of interested to do a bit of an ombre effect with the shades.  This should be a really interesting quilt! 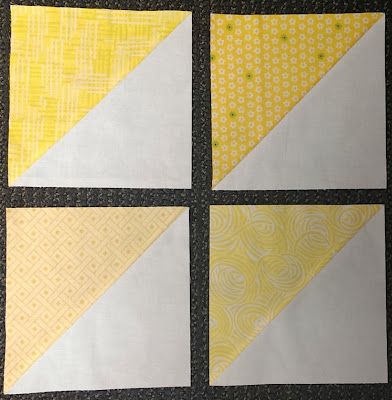 Lots of yellow in my sewing corner! Amy requested yellow and whilte/off white half square triangles. This will be a very bright and cheery quilt for sure! 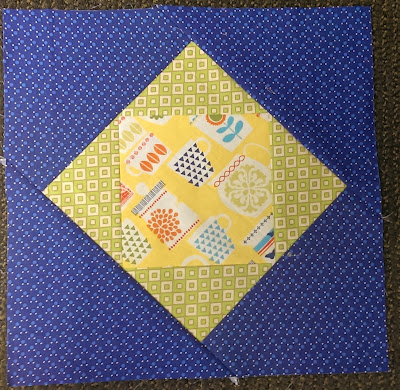 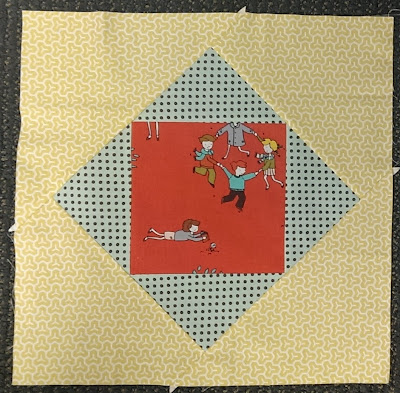 Lastly, Deb asked for 12.5 unfinished economy blocks. I thought these were quite fun. I enjoyed picking a festive print for the center square. I thought I was being so clever with the first one cutting those cute cups on the bias only to be foiled in the end! I overthought it and didn't realize that, because there are 3 layers, the center block ends up sitting straight. Oh well, as Mr. T. said, I can just say that "the cups runneth over!"

A few weeks ago I read this post on Sew Crafty Jess' blog and immediately became obsessed with the paint chip elephant frame she made for her daughter's nursery.  Mr. T's sister is due in a few weeks, so I latched onto the idea of making one for her, but then I had trouble finding the elephant punch (I could only find it online) and the baby isn't actually going to have a nursery - s/he will just be sleeping in his/her parents' room - so I figured artwork didn't necessarily make sense since the baby wouldn't have his/her own space.

Lest my desire to make one of these not be foiled, I instead picked out a flower punch, a nice wood frame, glue dots, and some (read: an unnecessarily large stack) of paint chips from Lowes, and set to work making an adult version as a birthday gift for Mom.


Mom's birthday (and it was a big one) was a week before her wedding and she happened to be in DC for someone else's wedding, so we were able to celebrate together. I picked her and Eddie up from the airport we went straight to her first gift - a chocolate walking tour of Georgetown. Perfect for my chocolate loving mother!

That evening, we nursed our sugar highs with a delicious dinner. My brother even drove four hours just for the meal as an extra surprise for her! All in all it was a great weekend and I think Mom had a fantastic birthday.

Obviously I had to stop in some fiber stores while in Savannah. We went by a cute fabric store, fabrika, but nothing really struck my fancy. At The Frayed Knot, however, it was a different story. I have a much harder time resisting yarn than I do fabric - clearly, I'm more of a knitter than a quilter at heart! 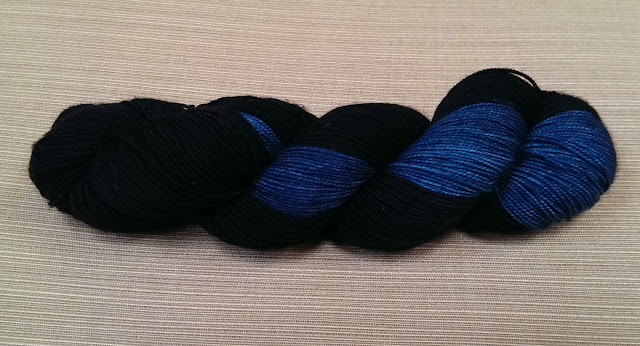 I only had a few minutes because the fam was waiting, so I focused on some beautiful yarn that is locally dyed in Savannah by The Copper Corgi. Since reading this post, I've decided that's my new strategy to ensure I'm getting something unique that would be much more difficult to find at home.

This past weekend, Mr. T and I traveled (read: drove 9 hours!) down to Savannah for my mother's wedding. Even though I grew up about 4 hours from Savannah, I'd never been, but I'd always heard great things so I was excited for this destination wedding. The city did not disappoint. It was a beautiful occasion and, because the wedding was the first day (on Halloween), we had the rest of the weekend to relax and enjoy vacation. 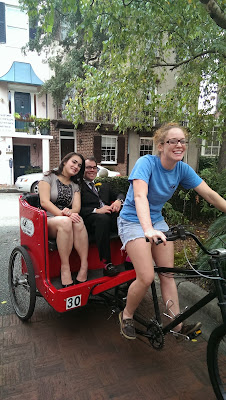 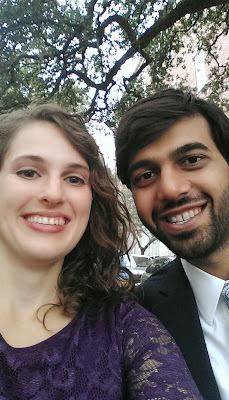 We took pedicabs from the B&B where we stayed (so nice, highly recommended!) to the synagogue. Left is my brother and SIL, right is me and Mr. T. It was a fun and unique way to travel. Mom's husband's grand kids (Mom's step-grand kids...) even attached signs to the back of their pedicab saying "Off to get married" and "Just tied the knot" for afterwards.

The happy couple right after they tied the knot. I'll go into detail about it later - hopefully once I get better photos from the photographer - but part of my wedding gift to Mom and Eddie was making the chuppah, the canopy under which they're standing (previously mentioned here and here). In Jewish weddings, the bride and groom are married under the chuppah to symbolize the coming together under one roof. This was definitely a labor of love and caused me quite a bit of anxiety, but I'm really happy with how it turned out and, more importantly, so was Mom. 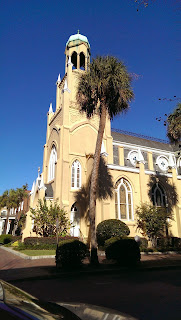 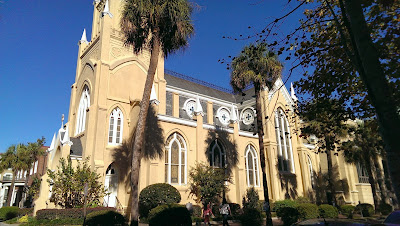 Interestingly, the synagogue where they got married is the third oldest in the country. I was surprised any Jews even lived in Savannah, let alone one of the oldest congregations!


After the wedding, it was all fun and games. We went on a walking tour (with an 87% blind guide who was great!), toured an old house, and rode scooters! I also went on a nice, long run in preparation for a half marathon in a few weeks, so that was a great way to get to see the majority of the historic district. 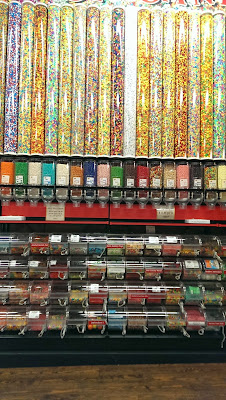 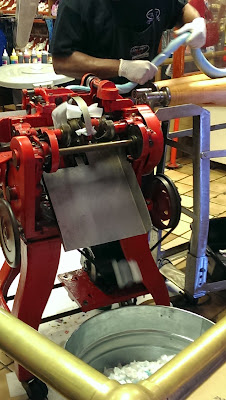 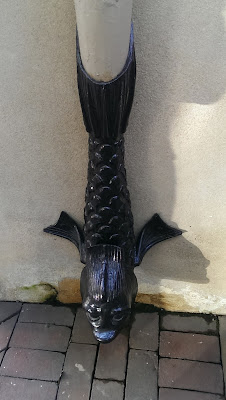 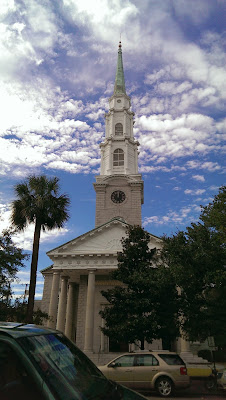 Drain spout and cool church. On Halloween they had a petting zoo in front of the church, but we didn't get to stop. Apparently this spire was also in Forrest Gump. There were/are A LOT of movies filmed in Savannah - our blind tour guide kept rattling them off. 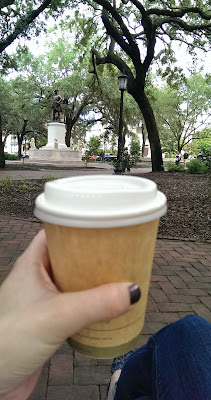 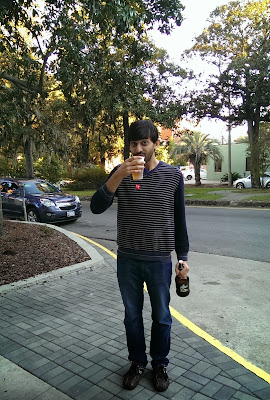 Drinking on the street. Coffee for me, beer for Mr. T. There are no open container laws, so obviously we had to take advantage! 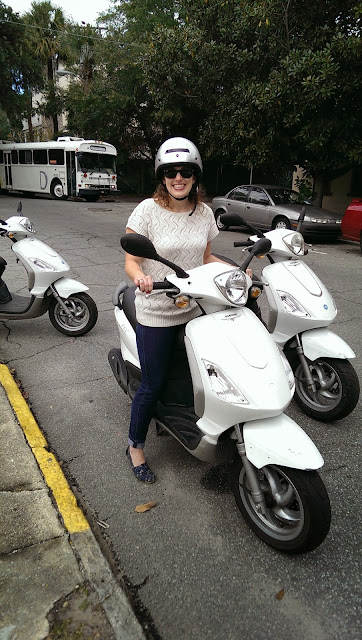 This was my favorite activity! I was nervous at first, but Mr. T and my brother convinced me that we should rent scooters, so we did. AND IT WAS AWESOME! Let's just say, I'm a natural.