I never use Google Reader or any other blog-following software - I just have all the blogs I read regularly bookmarked and check the entire list almost daily.  Probably not the most efficient way of doing it, but when I'm looking for a way to fill a few hours at my desk, efficiency isn't really the name of the game.  Anyway, for those of you who do like to get automatic updates or one-stop shopping to see who's updated,  I've claimed my blog on bloglovin'.

Follow my blog with Bloglovin
Posted by Jess at 10:00 AM No comments:

This is the next gift I made for the secret sewer swap at the DCMQG retreat.  There was actually some confusion with swap partner assignments, so both myself and someone else made gifts for the same person. Since Jessie had to leave early, Aubrie and I compared gifts and decided to give some of them to Anna, who did an amazing job organizing the entire retreat and hosted us in her home.  Since Anna arranged everything, she did not participate in the swap, but Linda had the great idea that we all give her gifts to thank her for orchestrating the entire weekend. I ended up gifting a fat quarter, as well as this wrist pincushion. 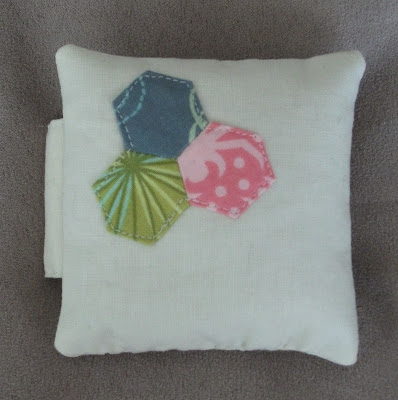 To make it, I loosely followed this tutorial with a few modifications.  First, I lined the wrist strap with SF-101 and a layer of batting to give it some extra stability and cushioning.  I also didn't double layer the strap.  If I'm remembering correctly, I cut a piece 4" by some length that was more than enough to wrap around my wrist with some overlap for the velcro join.  Second, I did not hand sew the pincushion to the strap as the tutorial suggests.  It seemed like this would be too flimsy, especially since the filling I used made this pincushion a bit heavier.  Rather, I machine stitched it similar as you would a purse handle with this kind of design:

This was actually my first time making a pincushion of any type and paper piecing hexagons, and I really enjoyed both tasks!  I need a new pincushion myself, and thankfully I have plenty of filling!  I've heard a lot of good things about walnut shells, so I picked some up from the pet store, but the smallest bag I could find was 5 quarts! Even after giving a bunch out at the retreat, I still have enough for about 50 pincushions. 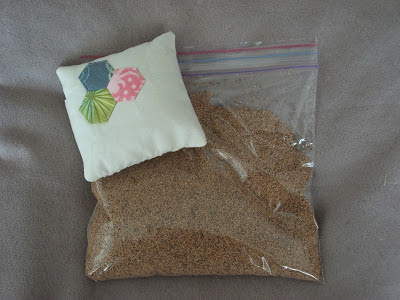 Anyway, hopefully Anna finds this useful and doesn't mind too much that it wasn't originally made for her (she had seen it before I gave it to her, so she knows that it was originally intended for Jessie). 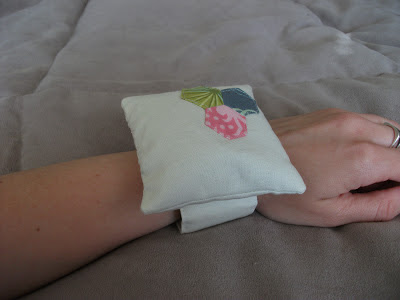 It's definitely handy to be able to wear it around your wrist and not have to worry about it getting knocked of the table (or in my case - batted and chased around by the cats, who also like to steal the pins...probably not a good thing...).

Secret Sewing with the DCMQG

Last weekend the DC Modern Quilt Guild had our first retreat! There have already been a few posts about it, so I'm not going to go into detail, but suffice it to say that it was awesome. It reminded me of my summers spent at sleep-away camp, only much much shorter and I got my own room (in a frat house...)! I'm still relatively new to the group, and I haven't been able to attend many of the most recent meetings due to conflicts and travel, so the retreat was a great opportunity to get to know my fellow members better!

As a part of that "get to know you," attendees could opt to participate in a secret sewer swap.  I was paired with Jessie, our president!  She unexpectedly had to leave early, but I was able to give her one of her gifts. The first day we were supposed to give two fat quarters. 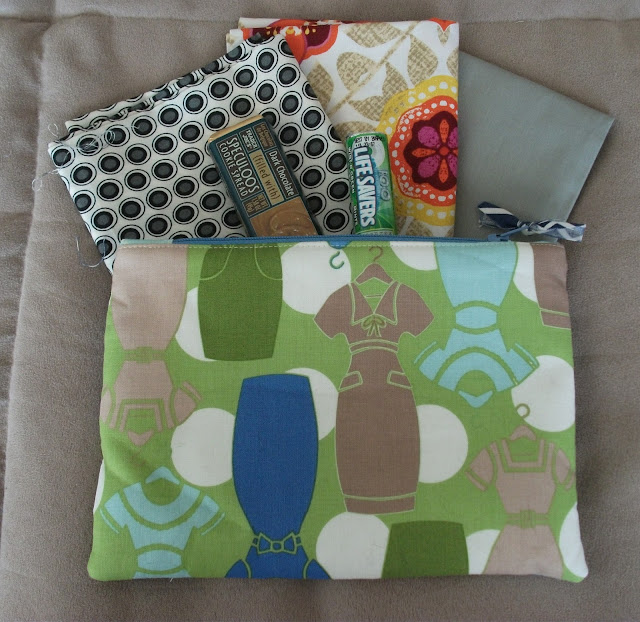 In her mosaic, Jessie said her color scheme is neutrals with pops of color, and right now she's was into black, pink, chartreuse, and blue-gray.  Well, my stash isn't very deep, but I managed to find a few things that would fit.  I also made a little padded pouch using this tutorial from Jeni at In Color Order.  Such a cute pouch and so easy! Also, this dresses fabric is one of my favorites! I'm going to make myself a little knitting pouch with it. 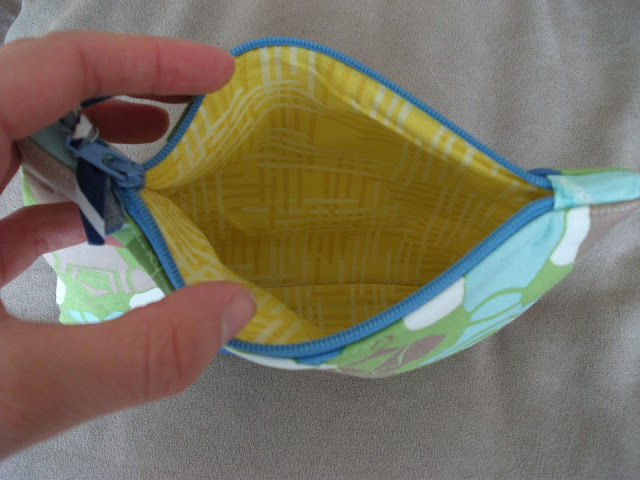 I also added a few of my favorite treats - lifesavers mints and a speculoos chocolate bar from Trader Joe's (seriously addictive!).

More on the other gifts later this week!

For this month's quilt, Amy asked us to make two blocks following a tutorial she provided. These were definitely good HST practice for me, though I'm glad I didn't have to make a whole quilt.  Just trimming the 30 2.5 inch HSTs for my two blocks left me with sore wrists.

I had a little trouble with some of the points, especially when attaching the two large triangles, but overall I'm pleased.  This is going to be one awesome quilt when it's finished!
Posted by Jess at 3:15 PM 1 comment:

So, my friend Molly is amazing.  She's always upbeat and positive, even when she's upset. She greets everyone she meets with a huge hug and an enthusiastic "HI, SWEETIE!" And she's currently studying her butt off to the best community health nurse ever (in one of the top nursing programs in the country, no less).  We always joke that we're essentially the same person - we have the same ticks, the same reactions to every situation, identical addictions to aquaphor. We even have the same sleeping styles - head halfway down the mattress with toes hanging off and two pillows, though we only actually use one. We've been friends for four years and every time we hang out we learn something new we have in common, and of course we're never surprised.

Despite how busy she is, she's always available for a chat and I undoubtedly feel better after talking to her. She's one of the most encouraging people when it comes to my crafting hobby (and really anything else in which I show a hint of interest), sharing my blog around and always talking me up to essentially anyone she meets. I made her a bag when she started nursing school, but I've been wanting to make her something else that could help comfort her when she gets really stressed out.  I'd been hoarding some Hope Valley to use on something extra special for Molly, and when I saw the Retro Flower pattern from The Sometimes Crafter, I knew it was perfect. The pattern paired with the fabric perfectly embodies Molly's super girly, retro chic aesthetic. And the Kona Bone matched beautifully with the off-white in the prints. 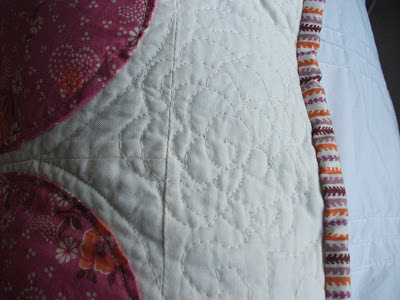 I got fancy with the quilting and did this flower on one side.  I was sewing until literally the last minute (I finished hand stitching the binding in the car on the way to meet Molly) so I could do these all around, but I like the effect of the one with the wide stipple. 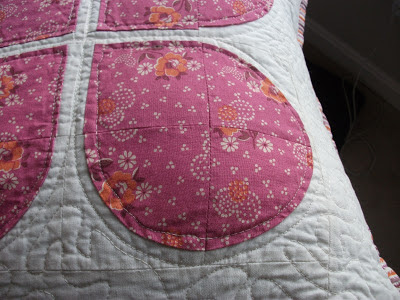 I think the backing is my favorite part - I wasn't sure about using these fabrics together right next to each other, but I think it worked pretty well. 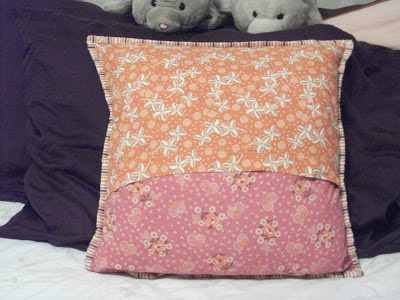 This was my first time piecing curves. It was okay - a few mismatch seams, but nothing a little practice won't fix. 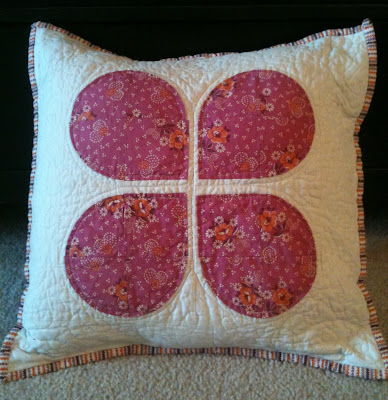 Molly and I had a sleepover yesterday (sidenote - adult sleepovers are the best) and she had the pillow prominently displayed on her bed!
Posted by Jess at 4:03 PM 2 comments: