I am beyond excited to finally be posting this!  I've been trying to wait until I'm able to get better pictures with my camera, but it's already been a week and I haven't had the chance and I can't wait any longer, so crappy, just-finished-making-this-and-had-to-show-it-to-Mom-immediately cell phone pictures it is.

My friend Sabrina, whom I've mentioned here several times, is awesome.  She's one of my closest friends and lives right around the corner so we get to hang out all the time.  She's also one of the biggest supporters of my crafting habit and was my first customer.  Her birthday was Christmas Eve, which I think can be difficult because birthday excitement gets lost in the holiday (as a Jew with a September bday, I'm just speculating here).  Anywho, I wanted to do something super special for her. I definitely wanted to make something, but there's already a quilt in the works for her (or, almost in the works...), I've made her a pillow, and she doesn't need an iPad case.  After some major brainstorming, I had a stroke of genius - a knitting needle case!!!  Sab and I learned how to knit together almost two years ago, so I thought this would be a great way to tie in our mutual interest while giving her something useful and handmade.
This is by far one of my favorite handmade items.  First, it's awesome and practical for a knitter.  Second, it's my own original design!  My first one!  And I really like how it turned out, which makes it that much better. Before I gifted this to her, I told Sab that if she didn't like it I was going to keep it. 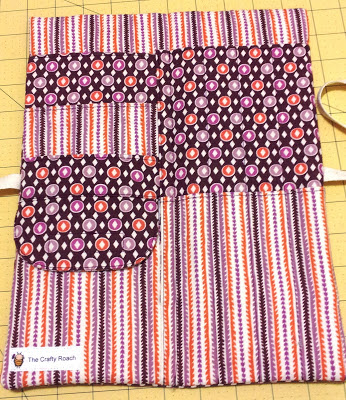 It has room for 10 pairs of straight needles or DPNs on the right, and three pockets for circular needles on the left.  I also included a velcro pocket for small notions such as stitch markers and darning needles (this was the toughest part.  I sewed it closed at least once while joining the inside and outside).  All of the pockets are stabilized with SF-101 and I added batting between the inside and outside covers for extra protection and softness.  It closes in half and ties with twill tape. 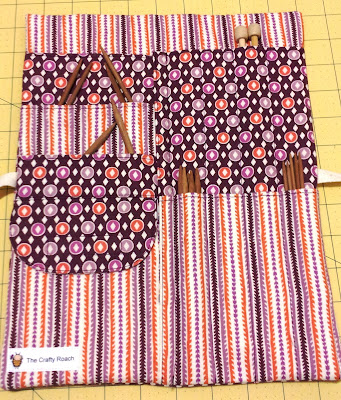 I'd been hoarding this Denyse Schmidt Hope Valley for a while, waiting for the perfect project.  I think it works great for this case.  It's a bit busy, but I think once it's full of needles that will tone down a bit.