Mr. T's sister and brother-in-law are having a baby! They're due in November and I for one am quite excited. I'm actually not much of a baby person (gasp!), but I do think it's fun when people I know have babies. It's more random kids of whom I'm not a big fan... [My friend and I always joke because she coos at any baby or small child she sees while I do the same for dogs!]

Anyway, yesterday she had a baby shower. They live in California, so I didn't go, but Mr. T did. We'd been talking about what to get her, and asking our friends with young children what one thing they couldn't have lived without, but we still couldn't decide on anything. To prevent him from showing up empty handed, I took matters into my own hands and made this ribbon blanket. 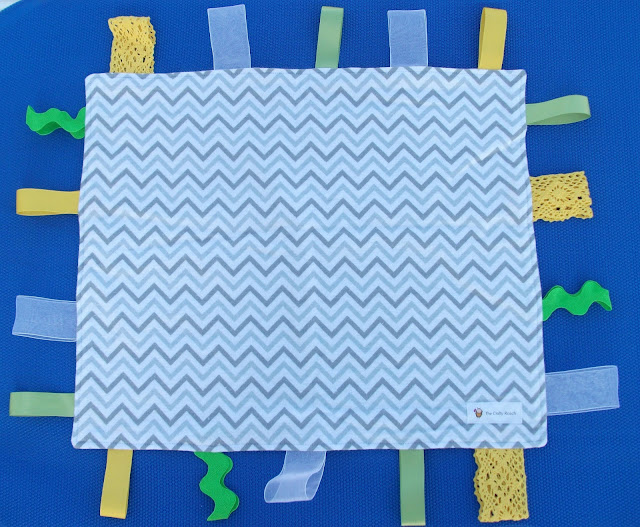 I'd first seen them at a craft fair and didn't really get the point until I saw a baby in a store having a grand old time tugging at one. A friend with a 6 month old son suggested using ribbons of different textures for an added level of interest, so I spent 30 minutes feeling every green, yellow, and white ribbon in JoAnn before settling on five.

They've decided to not learn the sex of the baby, so everything is gender neutral. Not sure why I always picture yellow, green, and gray/white as the only possible gender neutral colors. It's so not true. Though I do really like how they look together, so oh well.

At first I was going to get this really thick minky type fabric, but then I found this perfect gray chevron flannel. With CA weather, there's no need for such a thick blanket. Plus this was much easier to sew! Though I did have a major "oops" moment when I attached the ribbons the wrong way. I went to turn the blanket right-side out and all the ribbons were trapped on the inside!

I had the blanket on my desk at work because I was going to take photos out by the lake behind my office (no go since my camera was dead), and the VP of my department walked by and saw it and told me she wanted one! In all honesty, it's so soft I kind of wanted to keep it to...  Oh well, hopefully Mr. T's new niece or nephew loves it!