I blocked things! And since I've started, I can't seem to stop. I even took out an old hat from the closet and blocked it. And I was supposed to give it to a friend but then I forgot to bring it when I saw her. Oops. Anyway, back to the finishes! These projects have both been done for a while, but motivated by the Finish-A-Long, I finally took my Eucalan out of the closet and gave both of these items a good wash. Then I locked them away in the bathroom because it's the only space I can prevent the cats from entering.

First up is my Gemini top. I started this one back in May as part of the Tops, Tanks, and Tees Knit-A-Long hosted by Shannon from luvinthemommyhood. I was excited to be able to use some yarn from my stash, too.

I made a size medium and I think it fits pretty well. I have wide hips so I added a few more increases at the bottom. I also prefer longer shirts so I added a bit of length - though looking at it now I think it also stretched out a bit during blocking so I might have lengthened it a bit too much. Oh well.  The one part I don't like are the sleeves. I don't not like them enough to not wear it, but if I made it again I would definitely make them tighter. It's not so bad with my arms out, but when I put them down by my sides it gets a bit bunchy under the armpits. I have to admit that I haven't worn this yet for two reasons. First, I tried it on a few times for work, but it just felt a bit schlumpy. And second the weather hasn't been quite right yet. Haha, maybe I should stop making excuses and just wear it already! 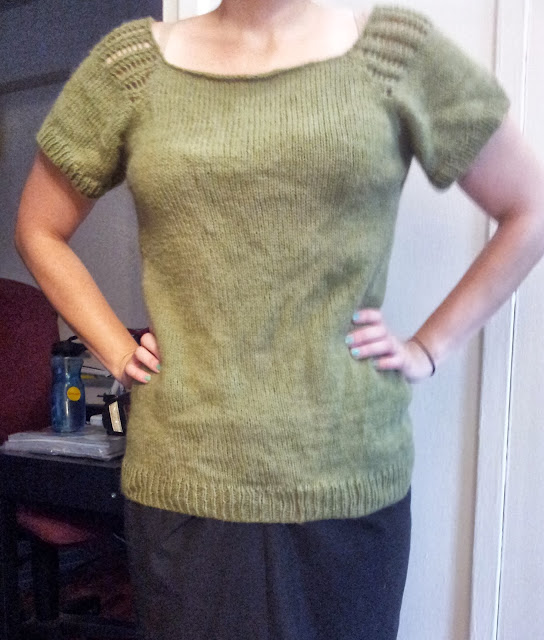 Next up is Mr. T's knit tie! This was definitely a labor of love. It took forever to make! So long in fact that Mr. T kept threatening to buy one if I didn't hurry up and finish. I used this pattern from Purl Bee and two Quince and Co. yarns - I'm pretty sure the blue is chickadee and the grey is finch, not sure of the colorways. 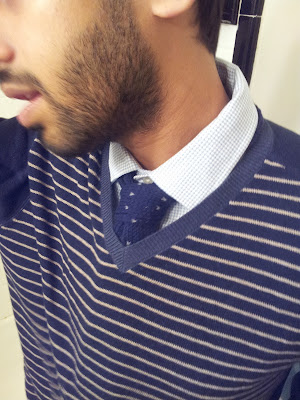 I tapered the tie so that it would be skinnier around the neck, but it's still really thick - the back of his collar won't even cover it, which is clearly a fashion faux pas. I need to spend some time stretching it, but I'm worried that might make it too long. Either way, knit tie: CHECK!


Both of these count towards FAL 2013 Q3! It ends Monday. Thus the rushed post with bad photos.