During my perusing of other blogs, I came across WIP (Work in Progress) Wednesday.  I currently have way too many WIPs to count, so I figured I'd join in a share them here and maybe that could serve as motivation to help me actually complete a few.

Since I'm linking back to a quilting/sewing blog, I figure I'll start with my current quilting project: 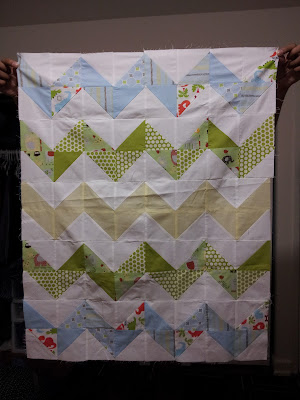 I made this quilt top using the extra fabric I had from {Sam's} Quilt and added some Kona Cotton in white.  I was originally making it as a gift, but after reading so much about the 100 Quilts for Kids project, I think I'm going to donate it and I'll make something different to gift.  I originally planned to back this in some super cute flannel, but instead I think I'm going to use leftover shades of blue I have from the napkins I made for my brother a few months ago and save the flannel for the quilt I will eventually makes as a gift instead of this one.

For only my second quilt top, I think I did a pretty good job.  My corners are a matched better than they were in my first quilt, but there's still plenty of room for improvement.  It's nice to see progress though!

I also have several quilts I'm getting ready to make.  The first is another to donate using this tutorial.  I bought some gray and purple fat quarters from JoAnn's the other day that I think will be perfect.  Obviously it won't be exactly like the tutorial because I'll have to piece the fat quarters together to make the large center square and the stripes, but I think it will still be nice.  I'm going to use some fabric from my stash (probably the same blues from the napkins - I have A LOT) to back it.

Next up, knitting WIPs:

Boyfriend Sweater
As you may remember, I started this sweater in January as part of a class I took.  Well, it's now six months later and I've ripped the entire thing out the arm holes because I wasn't happy with the product.  The sleeves were about 10 times too big for my arms, so I've now reduced the number of stitches I casted on when forming the arm holes and am working on forming the body (again).  I haven't been too motivated to work on this lately.  Maybe once the weather starts to get colder in the fall... 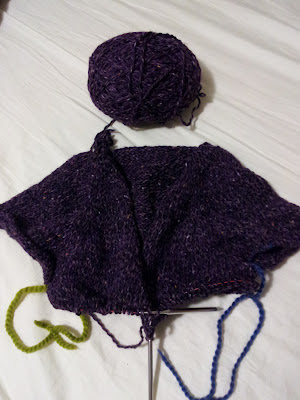 Crazy Eights Cowl
I began this cowl as part of a class, and it's actually been moving along smoothly.  Once you get the pattern down, it works up pretty quickly.  My hold up right now is that I ran out of yarn while I was working on it during vacation and just purchased a new skein.  The original yarn was Blue Sky Alpacas Worsted Cotton in Pickle.  For the second skein/second half of the cowl, I bought the same yarn in Honeydew, just to mix it up a bit.  I like the two tone look and I thought the paler green complemented the pickle well. 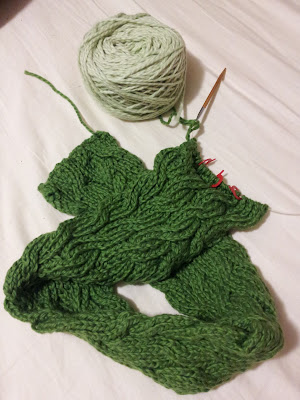 Baby Socks
I've never made socks before, but I've wanted to for awhile.  I tried to crochet some a few times before I learned how to knit, but I could never turn the heel.  Now, using Knit Socks! 17 Patterns for Cozy Feet by Betsy McCarthy, I'm almost done with my first ever sock!  I was supposed to be a baby sock, but I think I've managed to make it a little big...  I'm not 100% sure since I don't have regular contact with any babies or baby feet.  We'll see.  I guess bigger is better than smaller though, if I'm going to have sizing issues.

Making this sock (and soon it's pair) has been really fun and I'm super excited to make more socks. I already bought some more Shibui Sock in Spectrum and have looked up instructions for knitting socks two at a time on one needle, which a) helps make them more even and matched and b) eliminates "second sock syndrome," wherein the knitter is socked-out and doesn't ever complete (or resents completing) the second sock.  I just need to get one more skein of yarn and a longer needle and I'm good to go! 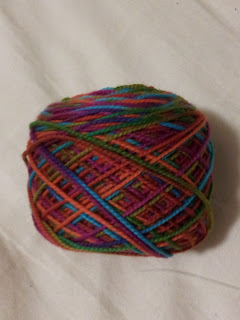 Hand Warmers
Lastly is a work that used to be in progress, but I've since ripped it all out and haven't yet restarted.  I was making hand warmers as part of the same class in which I started the crazy eights cowl above, but a) I was having difficult using so many double pointed needs and wanted to switch to one long circular and b) I'm hating this yarn.  I bought Classic Elites Chesapeake yarn in colors Meyer Yellow and Mandarin Orange and, while I love the colors, the yarn just twists and twists, making it very difficult to work with. Maybe after a few successful goes at socks I'll try to tackle this project again.  And hopefully I can use the two-at-a-time method, so I only have to go through it once! 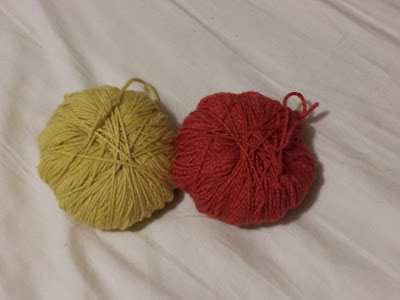 That's all I have going on right now (though I guess it's a bit).  Though I do have plenty of projects lined up.  I still have to figure out what to do with the great hand spun yarn Mom got me awhile ago.  I had an idea for a bolero, but I wasn't very inspired by it and I don't think Mom was too excited either, so back to the drawing board.  I also have a bunch of yarn in my stash to make Mr. T a sweater, as well as some other stuff I still have to figure out what to do with.  Not to mention all the quilting projects I've lined up for myself.  And with the holidays only 6 months away, I need to get going on that stuff.  Maybe it will just be socks for everyone....
Posted by Jess at 11:56 AM