My good friend Molly is starting nursing school in the fall, so I thought I'd make her a bag to send her on her way.  I'd been eyeing this pattern on Purl Bee for a few months and decided it would be great for Molly for going back to school. 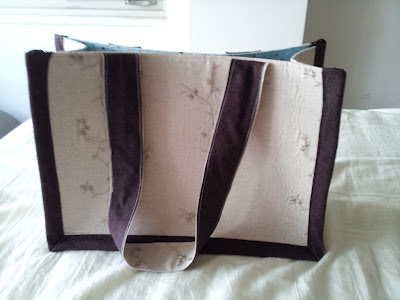 I immediately fell in love with this linen - the climbing floral pattern screamed Molly.  And the inside was a great blue with just hints of girliness in the polka dots and random flower bursts. 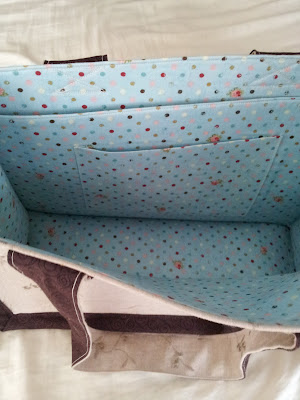 As expected, Molly was overjoyed to receive this gift.  She's the kindest, most generous, excitable (in a good way) person I've even known and I knew even if I gave her something that was awful and unusable she'd still be genuinely appreciative. 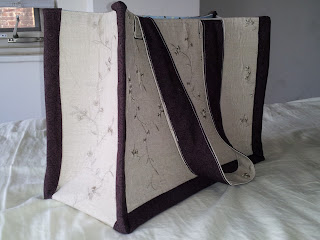 I have to admit, as excited as I was to make this bag, I actually hated the process and will most likely never do it again.  It could be my inexperience or accidentally purchasing the wrong interfacing (which I don't actually think I did, but who knows...) or both - but I struggled from the first moment with this bag.  It clogged my machine countless times and I thought had broken it.  The thickness of the interfacing made it very difficult to maneuver and fit in my machine, and I had difficulty with getting good, straight edges constructing it, resulting in whimply, poorly sewn corners.  Also, not a fan of hand sewing.  Though that might be a result of that fact that, by the time I got to the hand sewing part, I was beyond fed up with this project and just wanted it to be complete.

Despite all of that, I think it turned out pretty well.  Naturally, I made a mistake and attached the small pocket to the larger inner pocket rather than the side of the bag, but I think it will still work okay.  I've advised Molly to not carry anything too heavy in it or the corners might give, so hopefully that doesn't limit her too much.  According to her, she's been using it all the time and it's been great, and she's gotten loads of compliments!