The other weekend, a few friends and I met up for a short beach trip to the Jersey Shore. I rarely ever go to the beach, but a couple weeks earlier I got it in my head that I MUST HAVE A BATHING SUIT COVERUP, so naturally I made one. 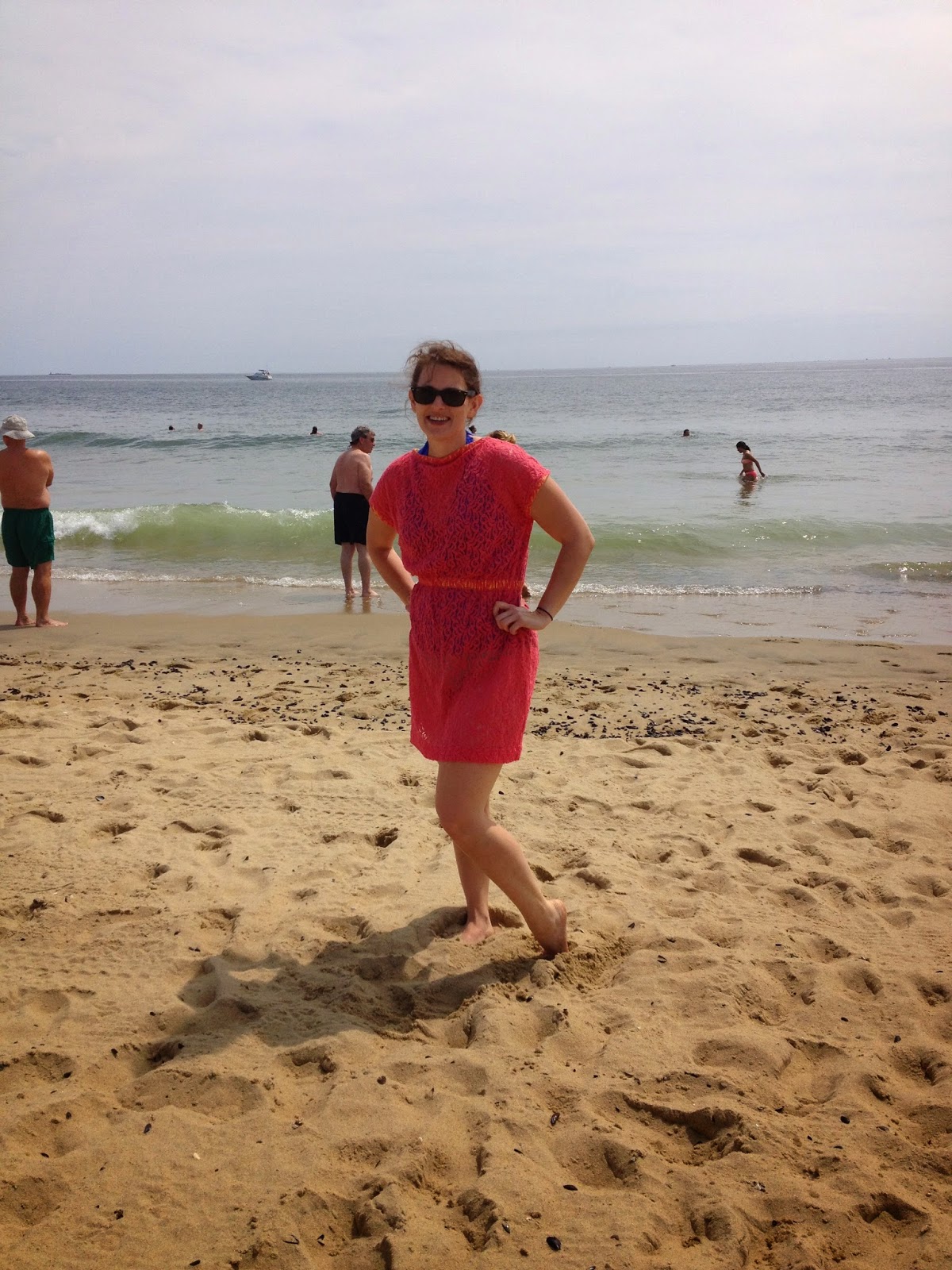 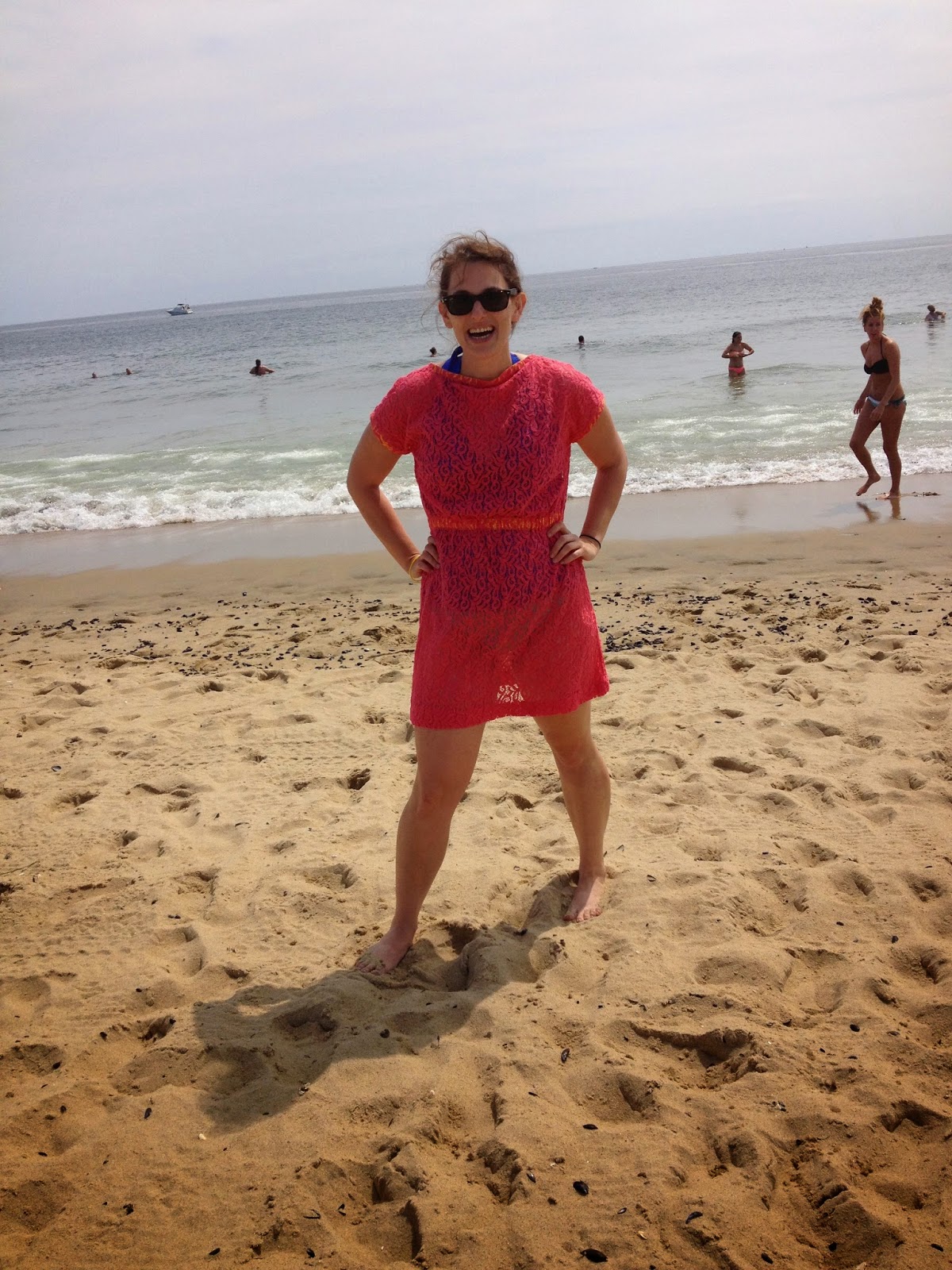 I used some corally-pink lace paired with yellow bias-tape, all from JoAnn, for a fun, summery feel. And I used the Staple Dress pattern, which was just perfect for a project like this. I was afraid the lace would fray a bit, so I used french seams throughout.

For my first Staple Dress, based on my measurements and muslin, I graded the pattern somewhere between a small and a medium. For this one I just cut a straight small and I think the fit is much better. It cinched nicely in the waist and doesn't fall off my shoulders like the original does. 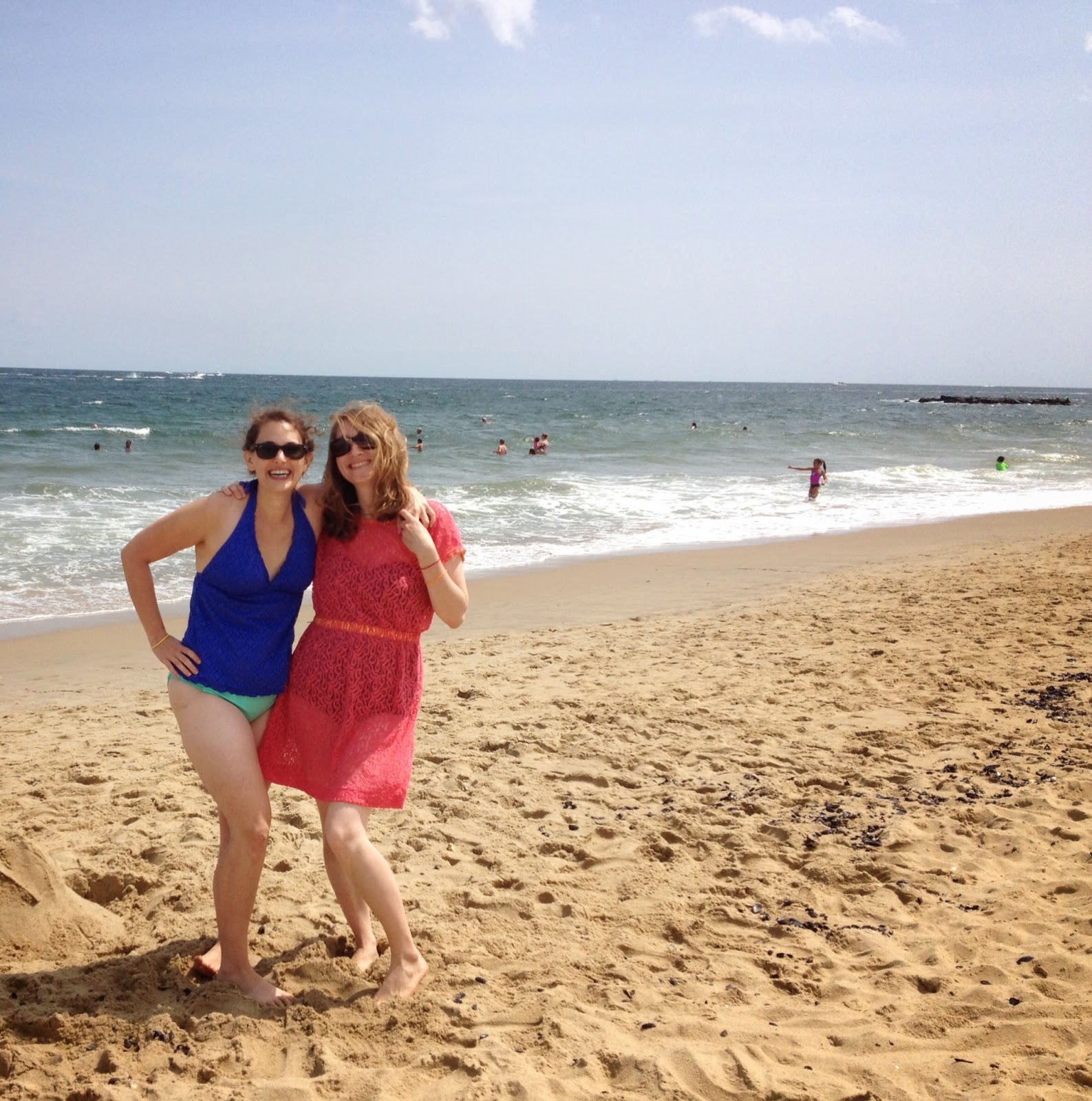 I used pre-made bias tape to finish the neck and sleeves in an attempt to speed the project along (though it still took me an entire day...), and I think it worked well. I really like the pop of color that the yellow adds. Bright pink and yellow is one of my favorite color combinations. 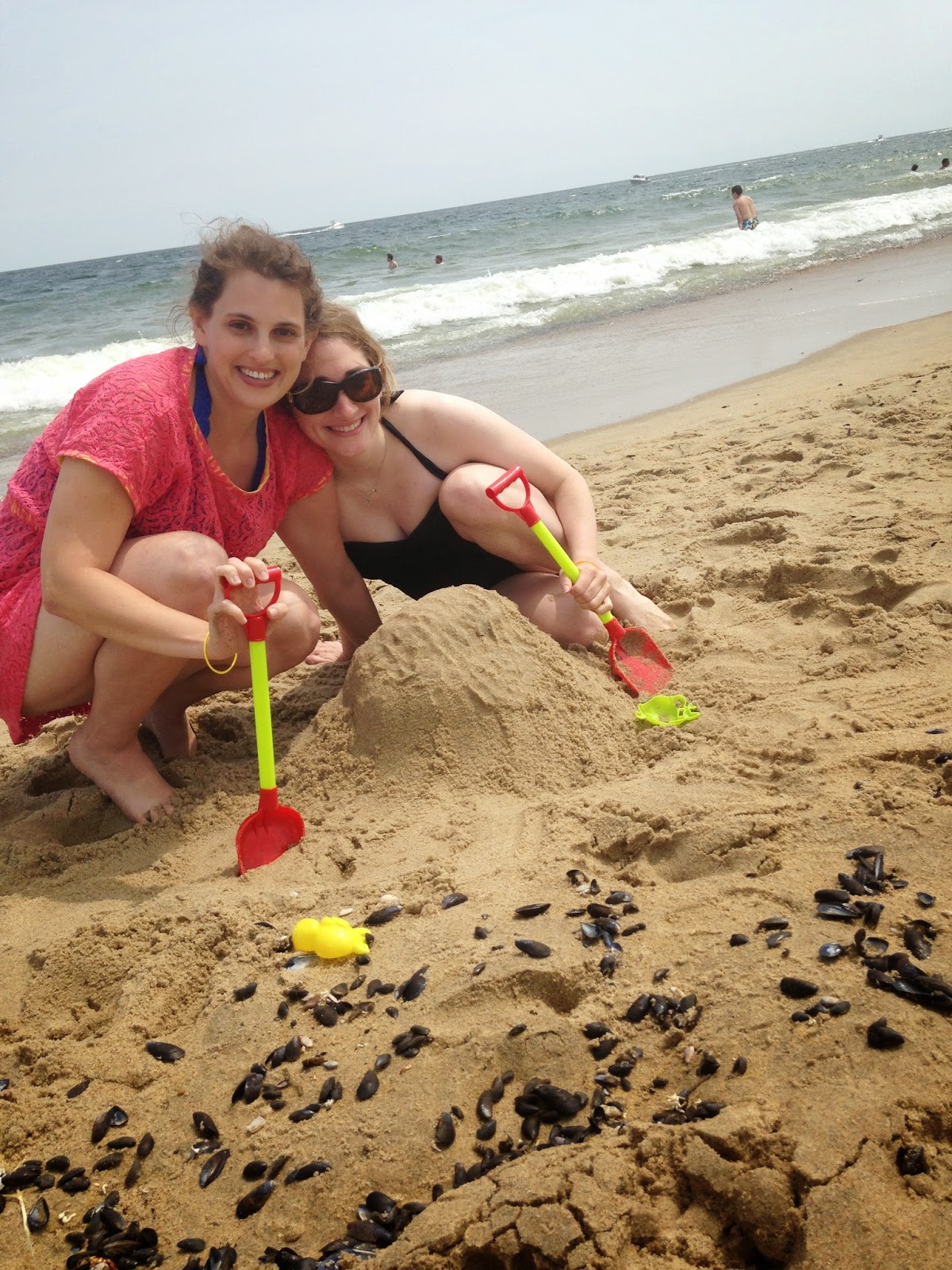 The waist cinching took a bit more thought. The pattern is written for shirring, but that was not going to work with this lacy material, so instead I again used store-bought binding. I measured a piece of double-fold bias tape to be a bit larger than the dress and, beginning at one of the side seams, sewed it on to the dress along both the top and bottom, leaving openings at either end to form a casing. Then I shimmied a 1/2 inch piece of elastic cut to be a hint shorter than my waist measurement into the casing, and stitched the opening closed. I stitched through the elastic in order to secure it and keep it from twisting. And that was it! At first it was really unevenly bunched, but after a wash it spread out. 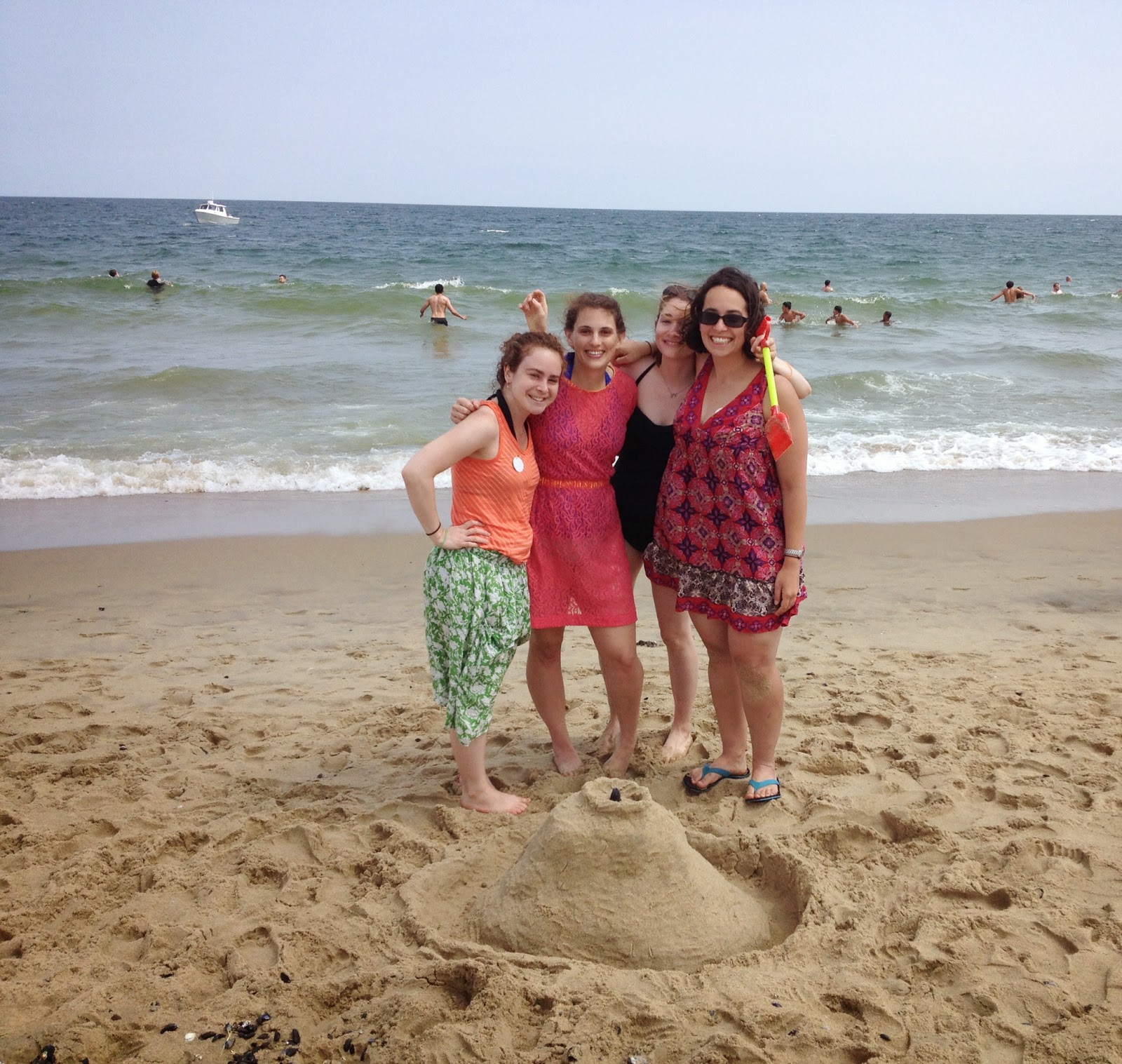 It actually ended up being a bit chilly on the day we went to the beach, so excluding the short time we spent in the water, I mostly hung out in the coverup. It was SO comfortable. Some random woman sitting next to me even came up and complimented me on that and the socks I was knitting. This project also reminded me that I need to make a few more Staple Dresses. The name of the pattern really is indicative of how much I wear my first one. In fact, I wore the original to the beach because I felt the coverup was a bit too revealing for commuting, just in case we had to make any stops (which we actually did on the way home - at a yarn shop - so good thing I planned ahead).