There's something about winter that just makes me crave the feel of knitting in my hands. To be honest, I have that feeling most of the time, but the sensation of the wool pulling through my fingers as I work away at the next hat, scarf, or sweater feels that much more appropriate in winter. So it's no surprise that I've been casting on and off at a much faster pace than usual. I have a few more items to show once they've been gifted, but for now here are two birthday gifts I recently completed. 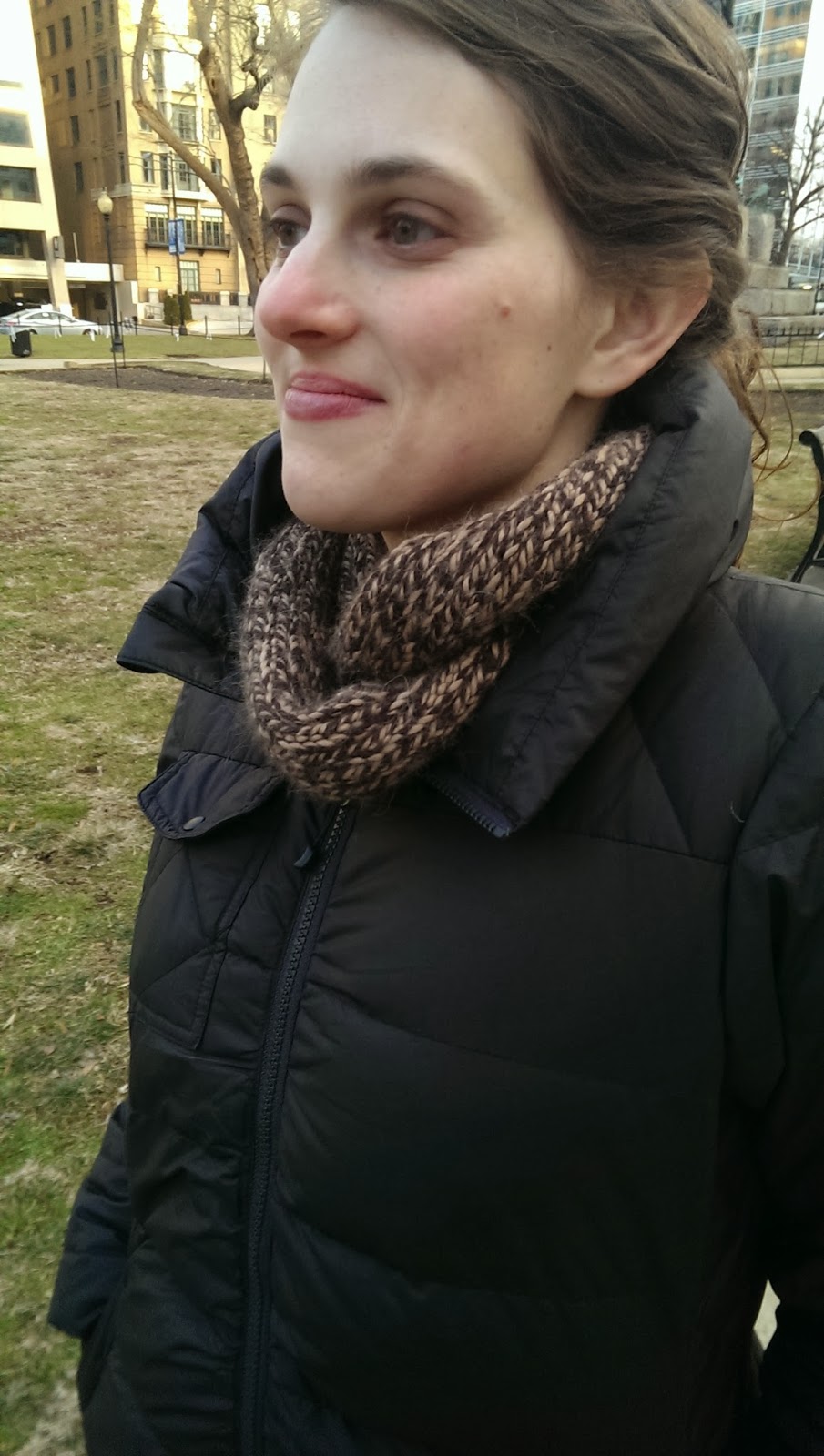 First up is a birthday gift to me. Technically the yarn was a gift from some friends, but since I enjoy the process of knitting that was a bit of a gift as well. Anywho, I bought the yarn from Purl Soho in 2012 and have been slowly chugging away on a Herringbone Cowl every since. I'm terrible at keeping track of my yarn labels, but I'm pretty sure this is Cascade Duo. Whatever it is, it's really soft.

As for the pattern, I'd been eying it for at least a year before I got this yarn and cast on (during my first jury duty session, no less), but I must admit I didn't really like it. I think the finished product on the website looks great, but I found that the stitches were so tight on my needle I could only handle working on this for short period of time before my hands - and brain - became fatigued. And if I made a mistake I had no idea how to fix it, so it's riddled with mistakes. For those reasons this cowl took me over a year to complete and I cast off well before the suggested width. Also, I somehow managed to twist my cast on stitches, so it's actually a mobious cowl. And I can't get it to flatten despite a very thorough blocking. Oh well. Despite all of that, it's quickly become the scarf I find myself reaching for first. It's just so warm and comfortable! 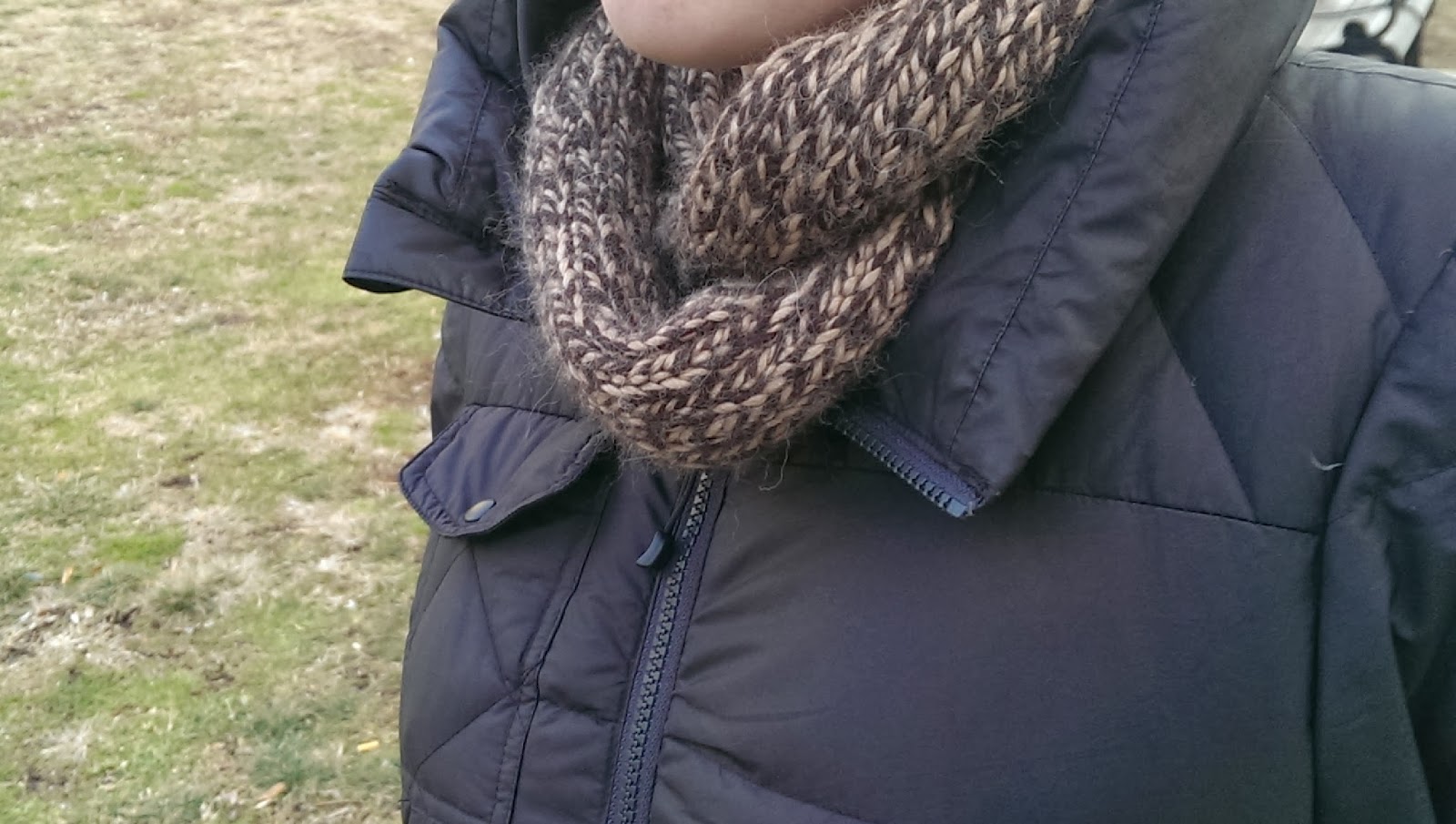 Next, I made this hat for Mr. T for his birthday last month. I made him a simple 2x2 ribbed hat when I first learned to knit two years ago, but a) it was made with junky acrylic yarn and b) he lost it about 3 weeks after I gave it to him, so he needed a new and better one. I snagged this Quince and Co. Osprey (in River, maybe...) from my LYS during one of their annual sales and, after much research and debate, settled on this free pattern. 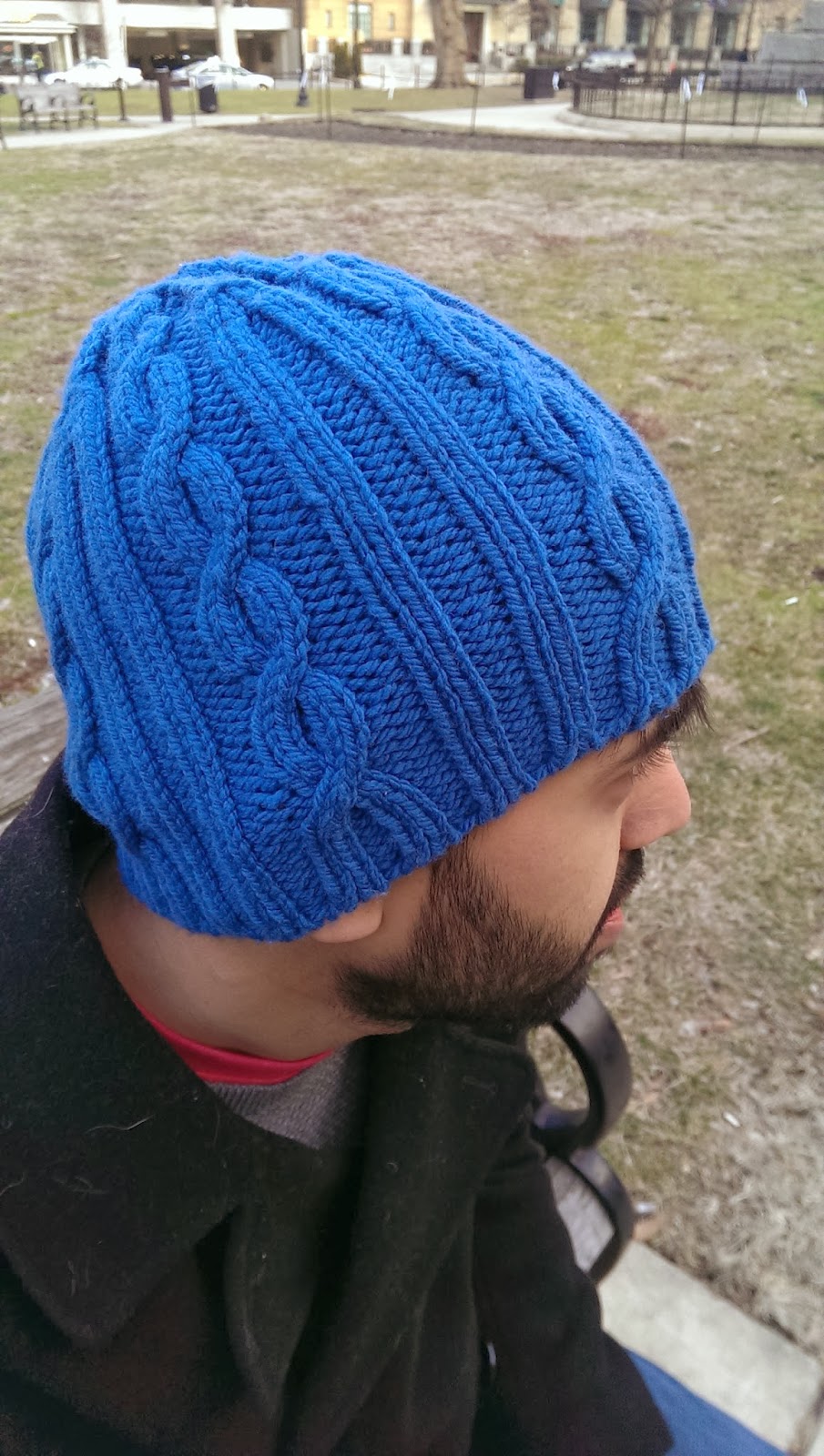 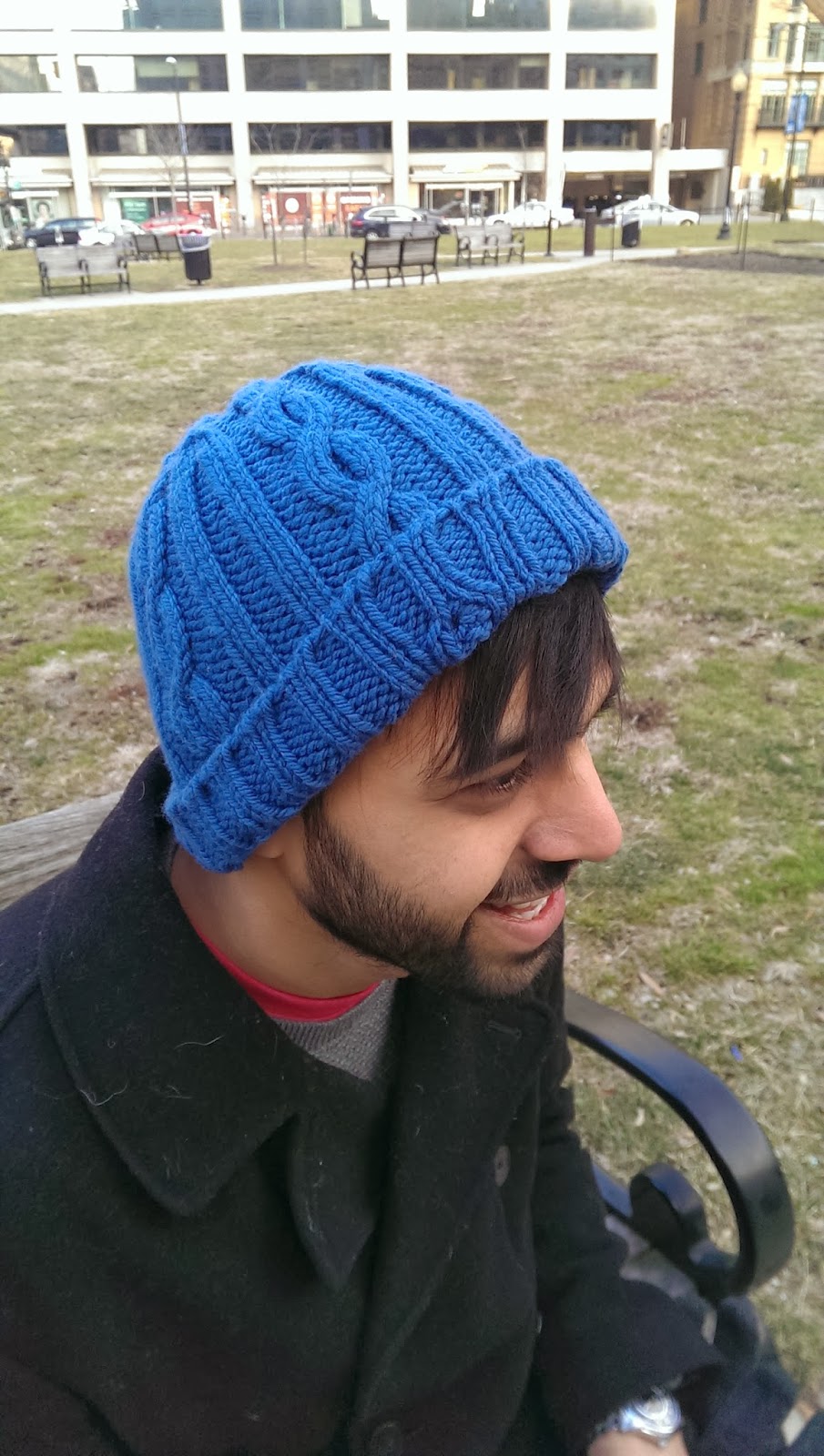 The pattern includes directions for both a hat that folds up and one that doesn't. Mr. T prefers hats without fold-up brims, so I followed that version, but I should have stopped one repeat earlier because it ended up a bit too tall. It still looks okay, as you can see on the left, just a bit pointy. But thankfully he doesn't mind wearing it rolled up and that emo-style goes well with his shaggy hair and beard. Now he just has to keep track of it, which apparently is harder than you might think. We've already had one near-loss and he's only had it for a month! 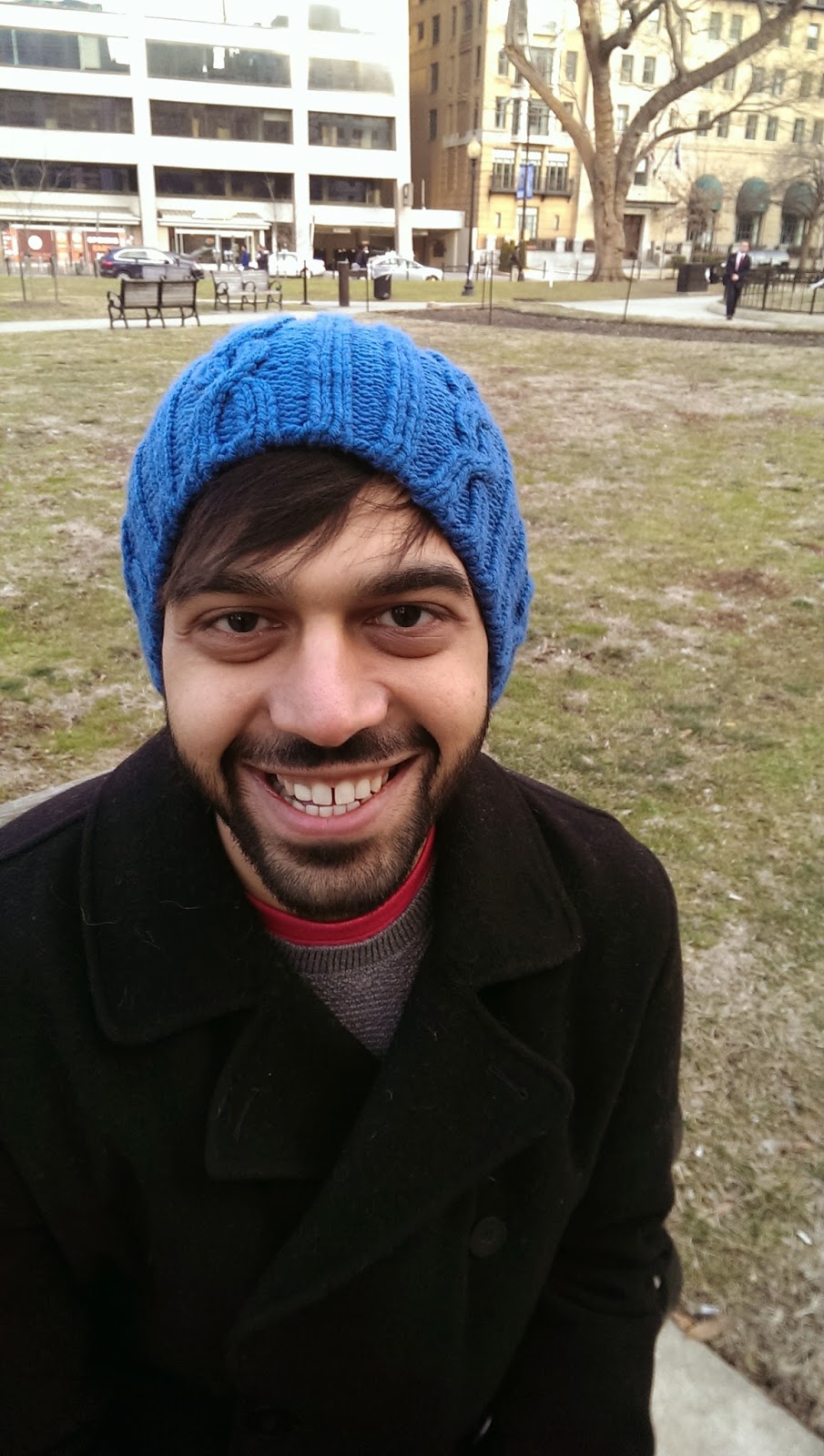