Here it is - my first-ever quilt (and pillow)!!!  I am so unbelievably excited about and proud of this project, I was tempted to keep it for myself.  Alas, I was afraid that would leave its intended recipient cold come winter, so I wrapped it up and passed it along. 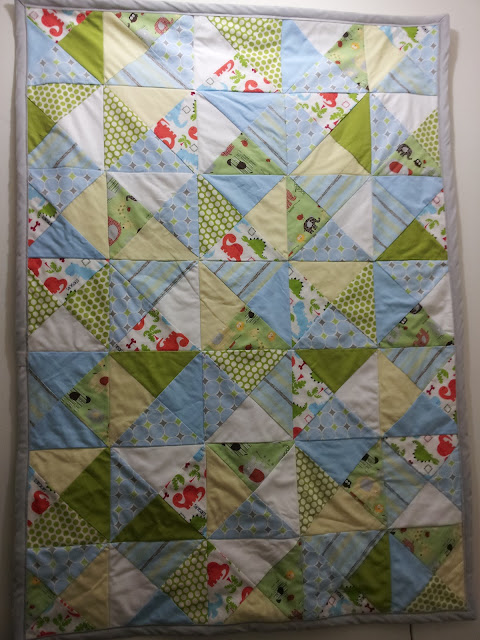 I made this, my first-ever quilt, for some friends who are expecting their first child in July.  I decided a little late that I wanted to make them something, so I was afraid knitting or crocheting an afghan would take too long.  After my daily perusal of Purl Bee, I came across this pattern for a Broken Dishes quilt.  I figured that it looked simple enough for my first quilting attempt, but still interesting and intricate enough to hold my attention.  As I headed to JoAnn for fabric, I had the brilliant idea to try to get some colors and patterns that would go well with the bundle I picked up from Purl Soho in March.  After way too long going back and forth along the same four aisles, I settled upon four fabrics - dinosaurs, blue circles, and blue and white solids.  I also purchased two yards of a green, patterned flannel to use for the backing to give the quilt some added softness and warmth.  At home, I was pleased to see how well my choices went with the bundle.  From that, I selected two contrasting polka dot patterns and the solid block.  The next day, I was doing some calculations in my head, and decided that I didn't have enough fabric, so I went back to JoAnn and bought three more - solid yellow, blue stripes, and green animals (elephants and owls!).

I spent the entirety of the next day cutting (after having pre-washed and pressed my fabrics).  I cut each of the quilt top fabrics into 5 1/2 inch squares, and then cut these in half to form the triangles.  After cutting, I realized that I'm terrible at math (well, really reaffirmed this knowledge) because I had enough triangles for two, if not three, quilts! (After some calculations and planning, I think it's enough for half of another quilt.  I'm sort of limited in what I can do since the pieces are already cut, but I have a plan now, so stay tuned to see what I make).

Since this was my first quilt, I wanted to lay everything out to see how it would look rather than just diving in and sewing pieces together randomly.  After laying out all this stuff on my bed, I realized I should probably make one of these (especially since I'm now semi-addicted to quilting, or at least thinking about quilting).

I then paired triangles, pinned them, and organized each column so that I would be ready to begin sewing.

Because I was so excited about it, this entire project came together much more quickly than I expected.  After just a week, I had everything pieced, basted, and quilted.  I even made a pillow case to match because I had so much extra fabric.  Because it was my first time quilting, I just did a simple square pattern, stitching in the ditch.  I thought about doing the triangles, but more of my corners than I'd like to admit were off, so I would have ended up with some pretty wonky lines on the back.  Squares were a much neater option.


Things I've learned while and since making this quilt:
1) Measuring pieces during the sewing process will help keep everything the same size and better ensure that corners will line up properly.
2) I didn't attach the binding correctly.  I still like the look, and it will work well and keep it bound, but in the future I'll use the sew one side and then hand sew the other method (see this tutorial).
3) On the next one, I might try pressing my seem allowances open rather than both in one direction, but we shall see.  I think it depends on the design and how I want to quilt it...

Overall, I'm very pleased with the outcome of this project.  The expectant parents seemed to like it as well.  When our friend pulled it out of the bag, she asked me where I bought it!
Posted by Jess at 9:12 AM