I've been wanting to be a part of a knitting/crochet group for a while.  There's open knit at my local yarn shop two nights a week, but for some reason that seems intimidating.  A friend has hosted a few knitting groups, but I've always had previous engagements.  And, honestly, despite how fun and helpful I think it would be to be part of a group, I'm quite cozy sitting on my own couch watching TV in my pajamas while I knit, so why mess with what's working.

Last Friday, I finally decided to step outside my comfort zone and go for it.  A friend forwarded me an email she got from her neighborhood coop - some people were trying to start a group and anyone was welcome to come.  So, my trusty knitting buddy and I emailed that we would be there and, come Friday night while others our age were heading out to the bar, we went off to knit in a stranger's living room!  IT WAS SO FUN!!!  Firstly, this woman's house was GORGEOUS!  She's lived all over the world and has artwork from her travels hanging on the walls.  I'd say she's in her early 60's and she's been knitting since she was a child, so she has a lot of experience.  She served as teacher for those who had questions or were just learning.  Another girl and I also offered a few tips, but for the most part we let the host handle it.  It seemed like most people were just getting started with knitting.  In addition to me and Sab, there were two other people who came with projects in hand.  One girl was working on a very pretty lace scarf.  The other was just getting back into knitting - she had started off making a scarf, but it was turning into more a large swatch/small blankie type thing.  Either way, it was really pretty and the yarn was luxurious.  Everyone else either came to learn how to knit, or were just starting new projects after a long hiatus and needed some help picking knitting back up.

All in all, it was a really fun time.  We're scheduled to do it again this week, so hopefully people come back.  It will be nice as we all get to know each other and can just chat rather than trying to force conversation or only talk about knitting.

Here are a few shots from the night: 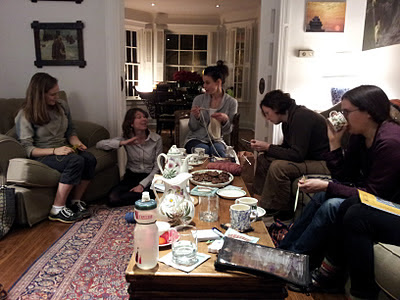 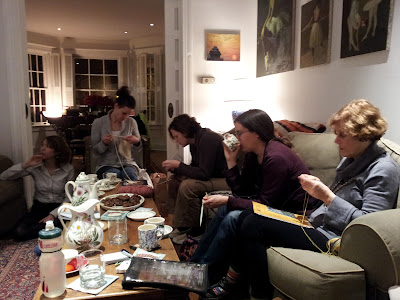