A Pillow and a Hedgehog

A tale of two gifts and two awesome ladies. Both of which I actually completed several months ago (the gifts, not the ladies), but only recently sent to the recipients, so I had to keep it hush-hush until they opened the package.

Nearly two years ago (I can't believe it's been that long!) one of my best friends moved away. She did an awesome stint in Cairo studying Arabic and volunteering as a refugee case worker. And last fall she started law school at one of the top programs in the country. Pretty much, she's a baller.

Well, with her travels, etc. I missed a few birthdays - plus I just miss her in general - so this year I thought I'd do something extra special. Naturally, that meant making something. Well, it just so happened that the fabrics sent out as part of the Modern Quilt Guild's Riley Blake Challenge were perfect for her, so my gift doubled as my entry for the competition. Win-win! 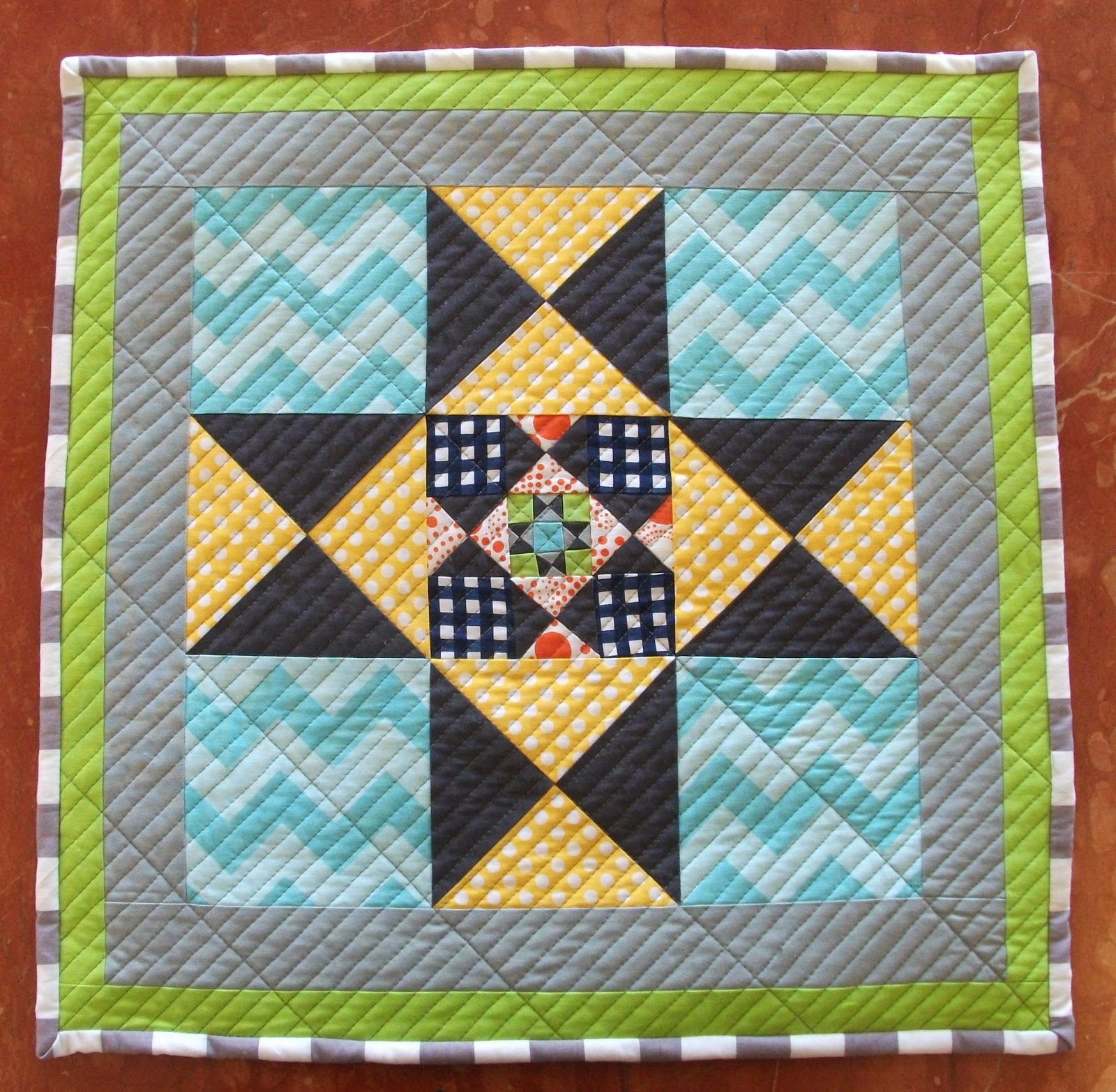 She's originally from Ohio (mistake on the lake) and, in my opinion, is obsessed with the state, so I used the Ohio Star Block as the base of my design. The tiny one in the center is only 1.5 inches finished. For the quilting, I did diagonal lines about 1/2 inch apart in one direction and then based on the lines in the top going the other direction. It was getting a bit stiff with all the quilting. 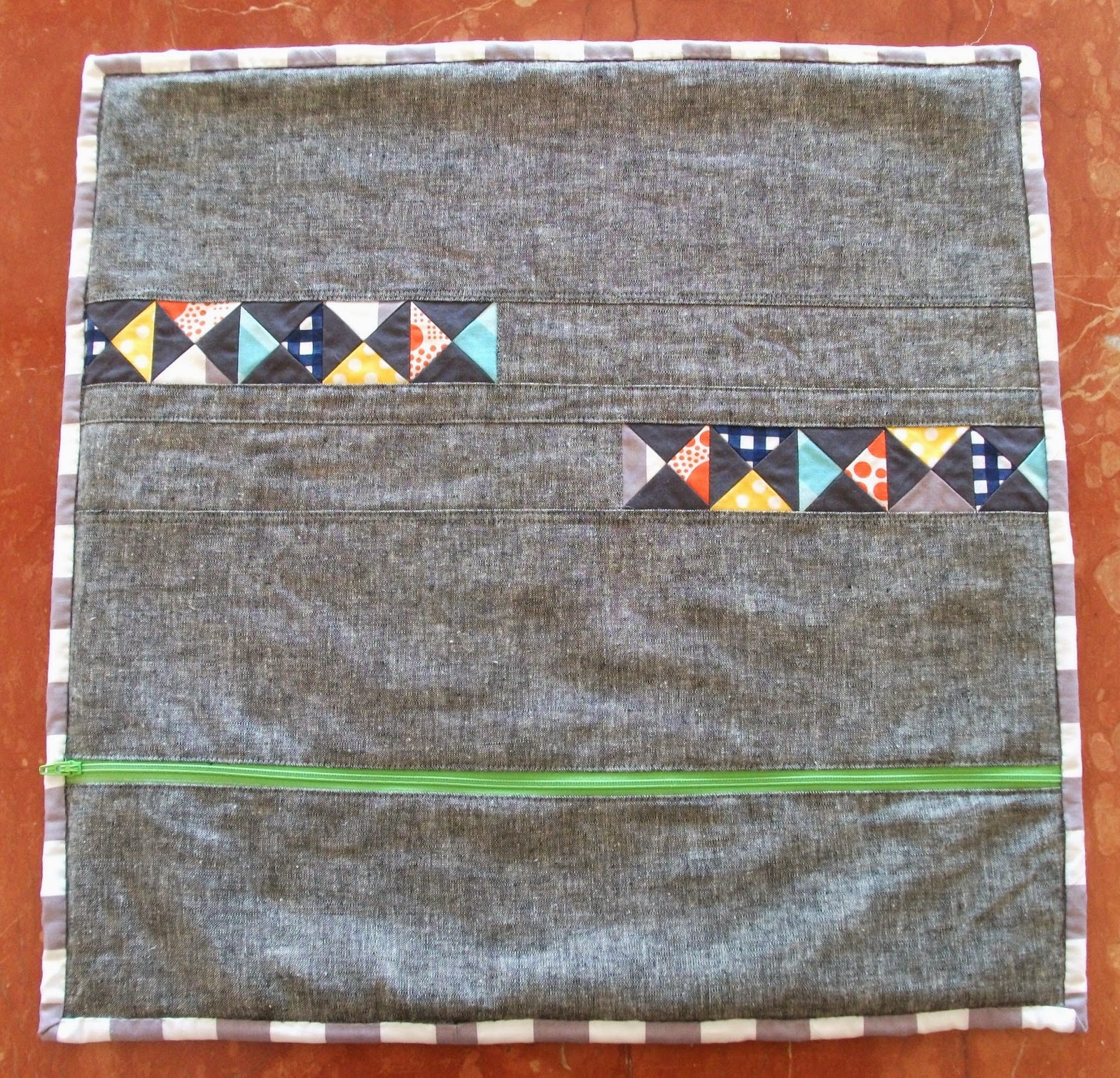 For the back, I echoed the hourglasses from the Ohio Star design, pulled in the green using an exposed zipper, and set it all in some delicious yarn dyed essex in black, which I stocked up on when Mr. T and I visited Pink Castle Fabrics in the flesh last summer. I did some light edge stitching to secure the seams because I've heard stories of the linen coming apart a bit. 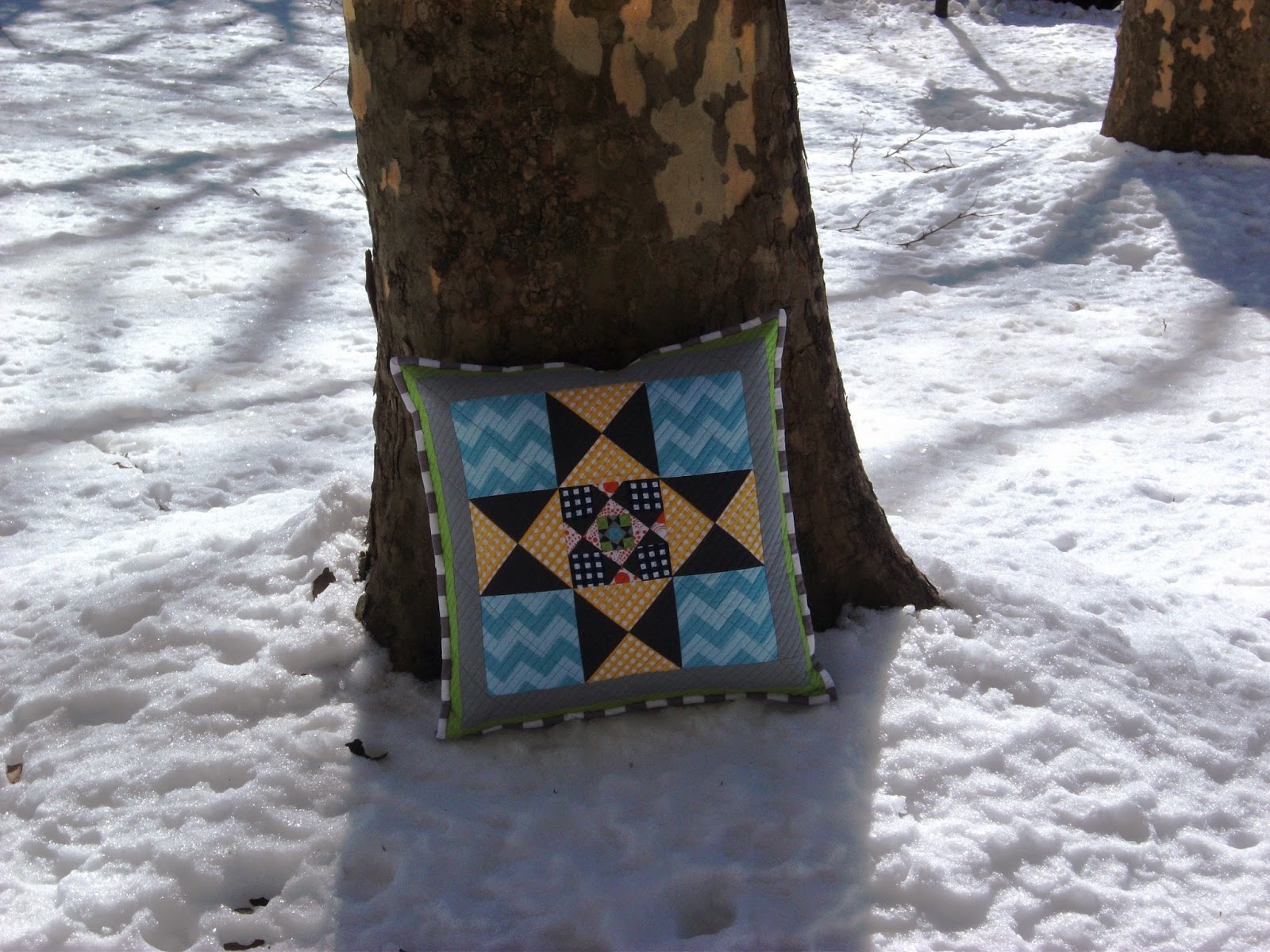 My friend called me as soon as she opened the box. She told me she couldn't believe I made the pillow case, which really is the highest compliment. In fact, her excitement was deflated a bit because at first glimpse she thought I made it, and then upon closer inspection she decided there's no way I could have so it must have been store-bought. Thankfully I was able to send her process shots to prove that I did in fact make it, so her excitement is fully restored and I've been told this pillow is already on the couch.

Now, for the other gift. This freaking adorable hedgehog whom I've dubbed "Groucho" because his nose looks like Groucho Marx's mustache. I used this pattern from the Purlbee, which I've been eying since they published it. He knit up in no time using not nearly enough scarp yarn.

Since I first saw this pattern many months ago, I knew I would make it for this particular friend.  We always laugh about this (slightly morbid) story: Her family isn't much for animals, but they had a pet hedgehog for a spell when she was younger. One day the family went for a hike and brought the hedgehog along for the ride to the trail. They decided to leave him in the car while they were gone, but neglected to crack any windows lest he escape. Well, when they returned they found a sadly overheated hedgehog who could not be revived. 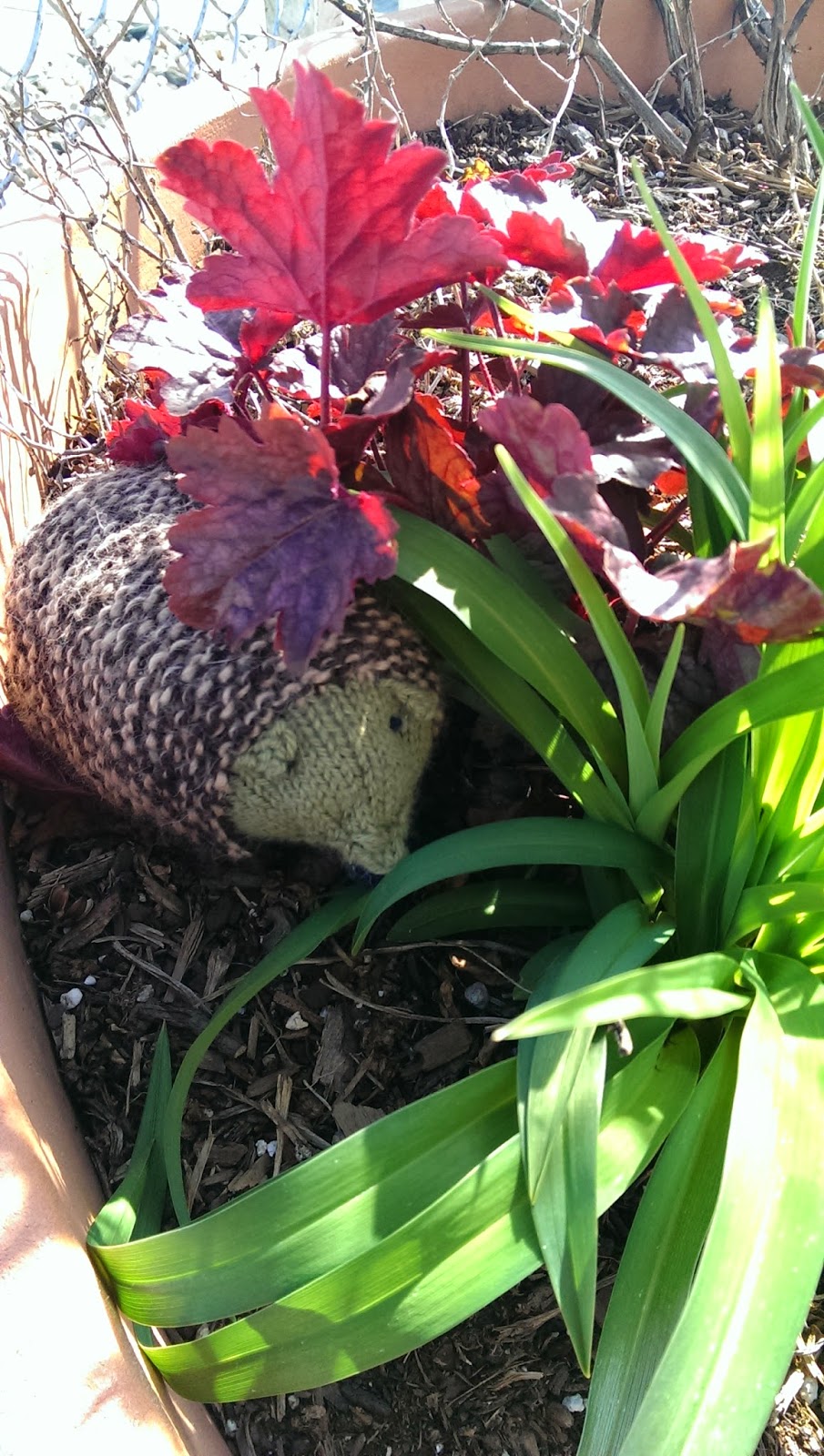 Needless to say, the hedgehog has become a constant refrain in our friendship. So I thought it would be nice to get her a new one that wouldn't mind being left in the car, or anywhere else, on a humid summer day. 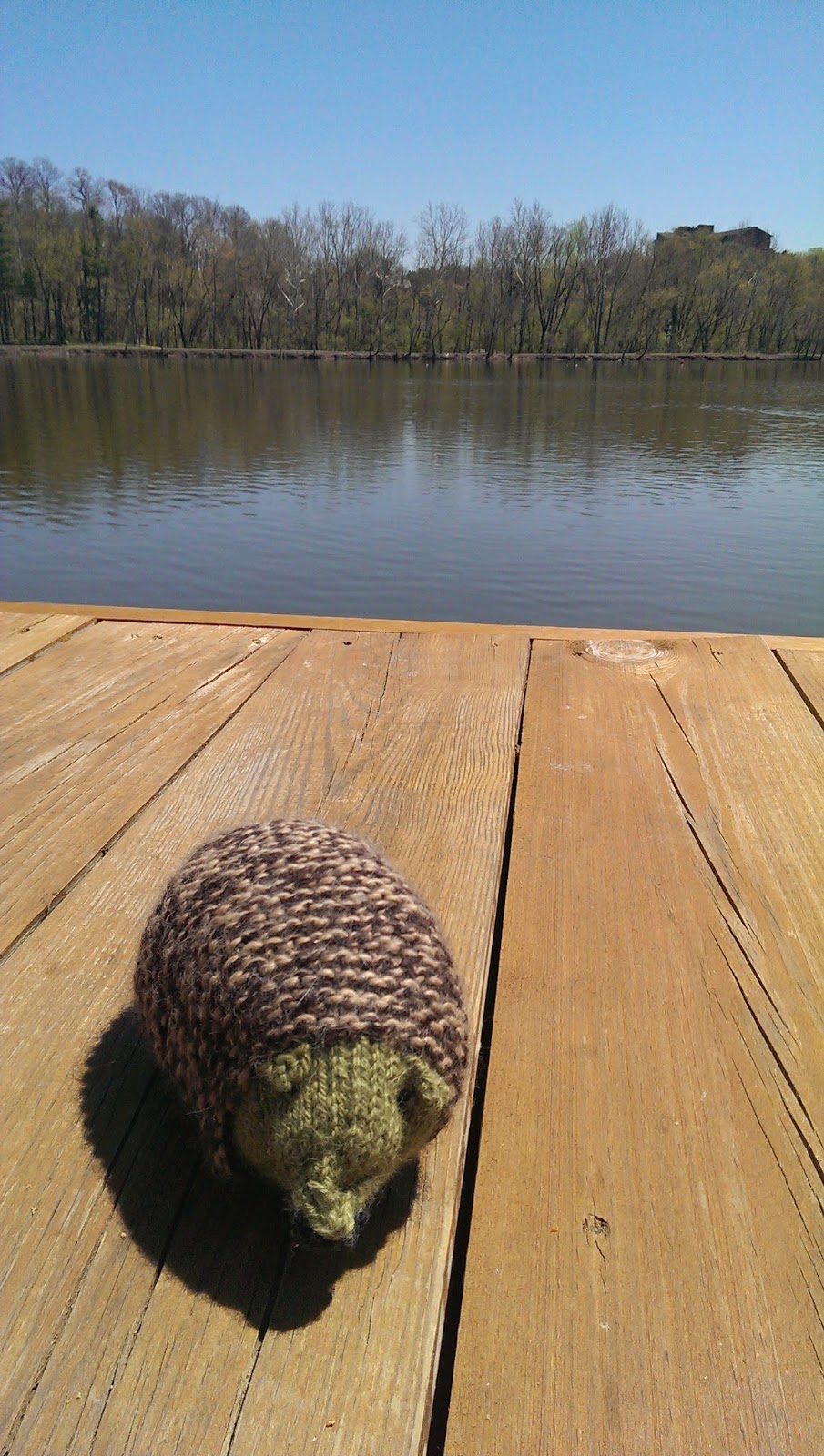 As for the timing, my friend was recently accepted to medical school at her top choice (also the top program in the country for her specialty), which is more than enough reason for celebration...and gifts!  Also, how are my friends so awesome?!  I hope I can be half as amazing and accomplished as they are when I grow up.