Mom asked me to knit a few Christmas gifts for her boyfriend's daughter and two granddaughters.  This request came a bit late, especially for knitted items, so I almost said no.  But you can't tell your mom no.  So I put a few other things aside and got out my needles.  To facilitate the process a little bit, I used yarn from my stash. 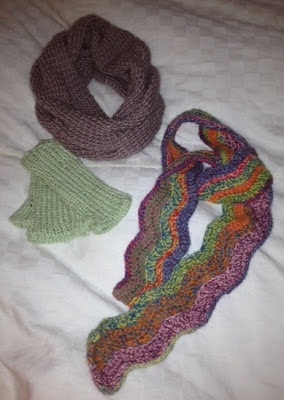 The first item is a scarf for Mom's bf's 11 year old granddaugther.  I picked this colorful yarn from Jamie's Rainbow Yarn that I've used for several previous projects (here, here, and here).  The three skeins I bought cost more than I typically spend on yarn, but considering that I was able to get four projects out of it, I'm quite pleased.  Anywho, for this scarf I used this pattern (found on Ravelry), sans the little ring tassel things at the ends.  I think that the colors striped relatively nicely, at least on one end of the scarf.  On the other, they got a little clumpy.  Also, I wish I'd had a bit more yarn.  I was only able to do five rows, and while it looks wide and thick on the Cat in Hat, it's a bit narrower than I had hoped.  I think since the recipient is young and skinny it should be okay, though. 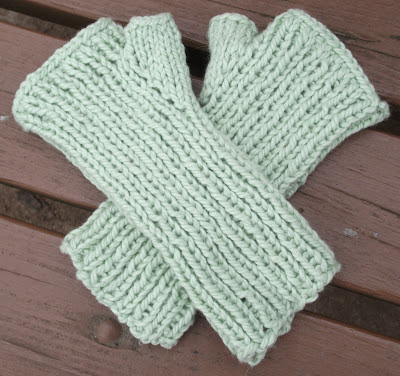 For the older granddaughter, I made these hand warmers, posted just in time on Purl Bee.  I used Blue Sky Alpaca Worsted Cotton I also used to complete this cowl.  Mom had originally asked for three scarves (and two pairs of mittens, which I quickly nixed with only 4 weeks to Christmas).  I really wanted to use this yarn for this gift - it's so soft and nice to work with, and I love this Honeydew color - but I was having trouble finding a simple pattern that I could finish quickly and that I thought would look nice.  I was so excited when Purl posted this tutorial.  I went home and casted on that night!  For my first hand item, I'm very pleased with how these turned out.  It took a few rows for me to get used to using double pointed needles (I'm usually a magic loop kind of girl), but once I got my rhythm these practically knit themselves. 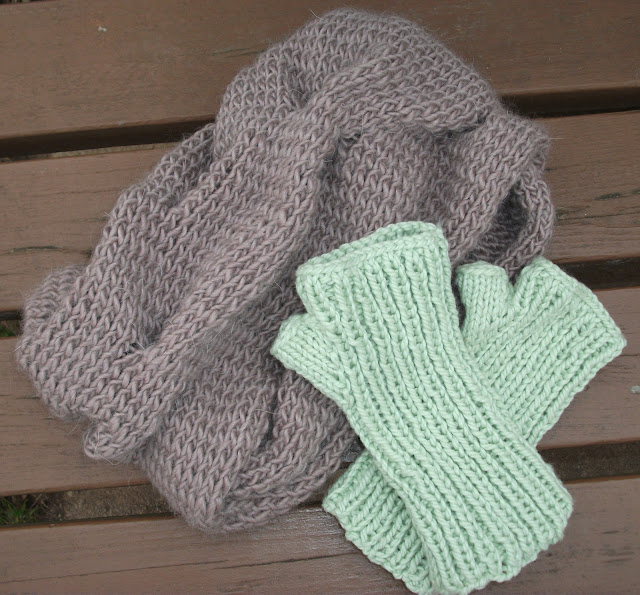 I actually made three hand warmers.  My original plan was to add two strips on the wrist using leftover yarn from my Chocolate Orange cowl, just for a bit of contrast, but I did not like the way it turned out. The colors looked good together, but the joins where I changed colors were awful.  I really need to practice that so it's not so noticeable.  (Does anyone have any tips??) 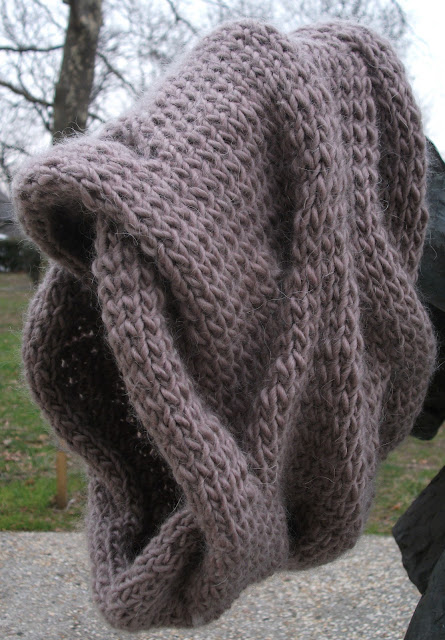 My favorite by far is this Slouchy Cowl. I had originally bough this yarn to use for a project with the fancy yarn Mom bought me, but I decided I didn't like that project (still trying to come up with something), so I had a brand new skein just waiting to be used (of course, I can't remember what it is anymore and I threw out the label. I'll try to remember to check the next time I go to the yarn store).  I really like the way the wide cables form this lazy, slouchy look.  It's a good length too. It's tight enough to keep your neck warm, but not so tight that you feel strangled.  It was also relatively quick to knit up, though the width did add a little extra time.  I might even make one of these for myself, though there's a long list of other projects I'd have to finish first...
Posted by Jess at 10:45 AM

Email ThisBlogThis!Share to TwitterShare to FacebookShare to Pinterest
Labels: Knitting