I don't know if I've mentioned this before, but I LOVE herringbone.  I think it's an awesome, classic pattern.  My favorite pair of shoes have a herringbone print.  Anyway, when I saw this quilt on the Modern Quilt Guild's 100 Days of Modern Quilting series, I knew I had to make it.  Around the same time I found that inspiration, I learned that a good friend from high school was moving in with her boyfriend in a new city, so I of course needed to make a housewarming gift.  Thus, these herringbone pillows were born! 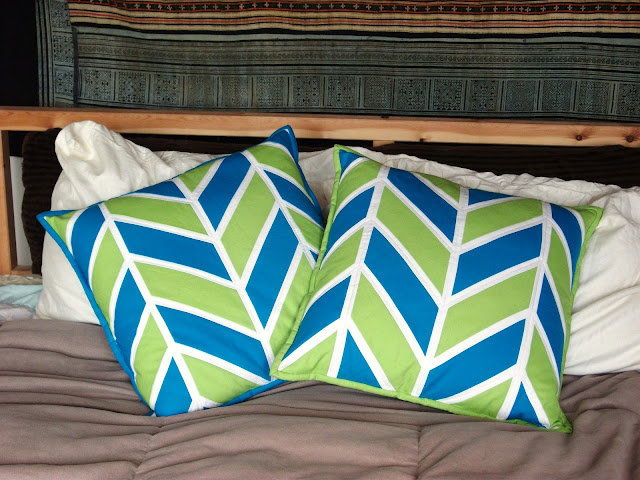 I first blogged about these a few weeks ago during WIP Wednesday.  After finishing a few other projects and getting a new walking foot, I was finally able to complete these pillows just in time for my friend to come visit. 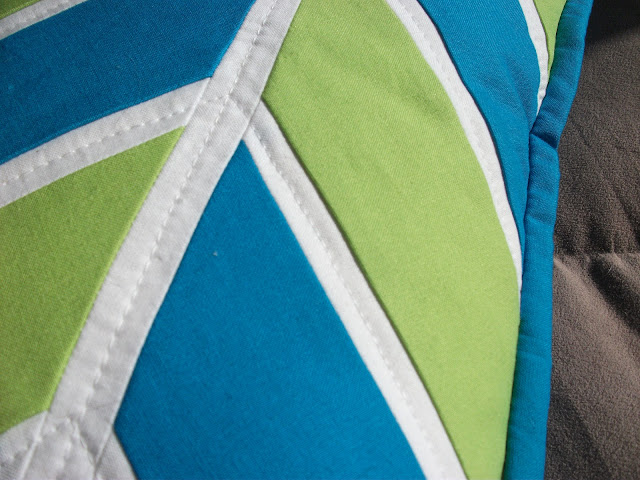 I quilted each pillow with simple straight lines in the sashing.  I was thinking about doing lines similar to that in the inspiration quilt, but I decided I liked the simplicity of this design better.  It allows the colors and pattern to stand out more than the quilting, which is what I was going for.  (I was also a bit short on time and needed a quilting design I could finish pretty quickly).

I backed the pillows in an offset shade of blue and finished each with a matching flap-covered zipper and hand-binding (my first time hand binding anything - I rather liked the process once I got the hang of it).  Just to mix things up, I finished one pillow in turquoise and the other in chartreuse.

A few things I learned during this process:

1) How to install zippers in pillows
2) Hand binding
3) How to correctly use my walking foot
4) That strip piecing is a great option (I was originally thinking about individually piecing each little herringbone part, but instead strip pieced them and then sliced them up on the bias - SUCH a better idea, I'm sure.  I can't even imagine how many headaches with stretching and mismatched corners I avoided).